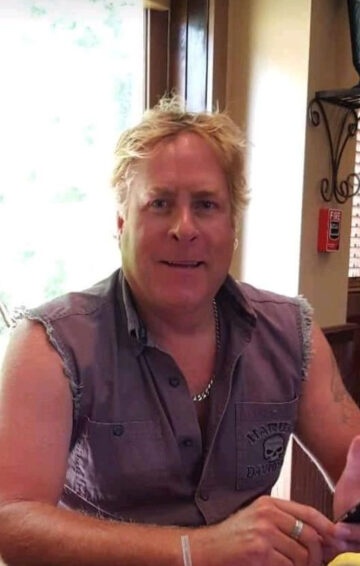 Winfried Tasker of Jerseyville, IL, passed away Wednesday, March 8, 2022, at the age of 53. He leaves behind the love of his life and fiancé Rhonda Carter; loving son of Winfried (Jan) Tasker, Sr; dear brother of Heidi (Timothy Stokes) Tasker, Lucretia (Vamsee) Lakamsani, Elizabeth Townsend, Richard Bradley and Ryan (Shirley) Tasker; many other family and friends. He is preceded in death by his mother, Diancy Tasker and his brother, Christopher Harding.

Winfried, Winnie, Win, The Big Deal can only be described as an All-American Standard good guy. He had several hobbies over the years, from hunting to old cars. His biggest passion was riding his Harley Davidson motorcycles. Whether he was alone, riding with the love of his life, Rhonda or meeting up with a group of friends, he enjoyed every minute of it.

Winfried was always ready to tell a story and would make you feel as if you were there. If you didn’t know it, there was always a little bit of jelly on it. He always had a smile on his face and the most infectious laugh. You honestly could not be around him and not have a good time. He was a proud U.S. Marine veteran and held that distinction with the highest regard. He was super excited when he got his Corp. Tattoo. Oorah!

Not one for change and a closet hoarder to boot, Winfried recently sold his home in St. Charles and decided to make his home in Jerseyville, IL with Rhonda. Those who know him well, know this was a huge step for him, and he was the happiest he has ever been. He didn’t even realize how he could light up a room and inspire people. Winfried will forever be riding and never have to watch a weather forecast. Thank God, because all his riding friends know he could never have a career as a meteorologist.

Winfried will be greatly missed by so many, and so many will be forever changed by knowing him.