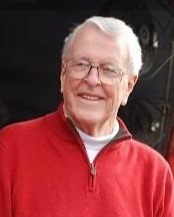 Warren proudly and honorably served in the United States Army Reserves. He worked as an engineer for McDonnell Douglas and then as Director of Development for Emmaus Homes. He was president of The McDonnell Douglas Management Club and the HOA of Paddock Forest. He was a member of the Engineer's Club of St. Louis and the Men of Beaumont. He faithfully served in various positions at Church of the Master UCC.

Warren’s hobbies included woodworking, landscaping, and tennis. He was a railroad enthusiast, a handyman, and enjoyed making stained glass. Warren was a fan of Frank Lloyd Wright (FLW) architecture and a lifelong fan of the St. Louis Cardinals baseball. Warren loved and enjoyed spending time with his children, grandchildren, and his new great-grandson.

Warren was dearly loved and will be greatly missed by all who knew him.

Memorials may be made in Warren's name in lieu of flowers to Forest Park Forever, Museum of Transportation or Church of the Master UCC - Florissant, Mo.

To order memorial trees or send flowers to the family in memory of Warren R. Werner, please visit our flower store.