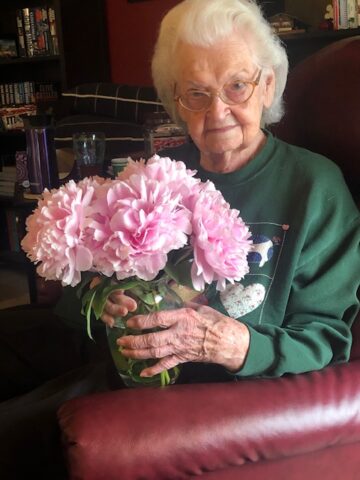 Velma and her husband loved to travel with church, friends, and family. They were very close with her brother and traveled often with him and his wife. These trips were often centered around Ben’s Navy reunions. Velma was adventurous with her overseas traveling and visited Ireland, England, the Panama Canal, Europe, and took many cruises. She enjoyed playing cards such as pinochle, bridge, and poker. Velma and her husband were in long-term card groups together.

Velma was active in church. She was a Sunday-school teacher or youth group leader for almost 50 years at Faith Salem UCC. She enjoyed dancing and going to the USO dances. Velma swore she would never marry a navy man, but married Benjamin in 1946 shortly after he completed his service in the Navy during World War 2. Velma loved to read and do crossword puzzles and donated much of her spare time to volunteering at Meals and Wheels for years as well as supported Job's Daughters and the Masonic Family. She was extremely giving and would bake cookies which she delivered to shut-ins. Velma also had great love for animals especially dogs. She loved to watch and cheer on her St. Louis Cardinals baseball team. Velma was dearly loved and will be greatly missed by all who knew her.

Memorials may be made in Velma's name to Stray Rescue or Church of the Master UCC.