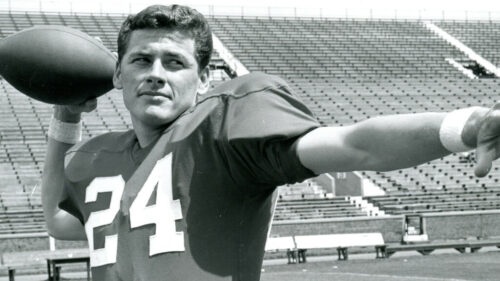 Known simply by the initials “TVG,” Tim was born May 26, 1944, in Racine, Wisconsin to Clark and Doris Van Galder (nee Simonson). At the age of 8, Tim’s father, Clark, was offered the head coaching position at Fresno State, and Tim spent his elementary years surrounded by athletics in the Fresno State locker room. When he was 15, his family moved back to Madison, Wisconsin, when his father was asked to be the assistant coach at the University of Wisconsin.  Tim quickly became a standout athlete at Madison West High School, playing basketball, baseball, football and wrestling. After high school, he went to New Mexico Military Institute before transferring to Iowa State. His athleticism on the football field and baseball diamond at ISU is still remembered today and earned the ultimate achievement bestowed upon his alma mater’s athletics department when it was announced he was a member of the Class of 2015 Athletic Hall of Fame.

Tim graduated from Iowa State University with a Bachelor’s of Science.  After college, Tim was drafted by the St. Louis Football Cardinals (now Arizona) in 1966, where he played for two years.  He took a brief “time-out” from football to join the United States Army, and he served his country during the Vietnam War.

Once he returned to the game, Tim played for the St. Louis Cardinals in 1972, Cincinnati Bengals in 1973, and then the New York Jets that same year.  After his football career ended, Tim came back to St. Louis to work at Channel 4, where he spent 13 years as a sportscaster.  He brought a refreshing new look to TV sports reporting, ditching the coat and tie behind the desk in favor of a cardigan in front of the camera, preferably live on location, even working a few NFL games with Bob Costas and Al Michaels.

Tim enjoyed his later years on the golf course with countless friends, supporting many local charities, and the NFL alumni association.  In his final years, he was proud to live within minutes of great friends like Mel Gray, Johnny Roland, and Jackie Smith.

When TVG entered a room, he quickly owned it with his authenticity and smile. Known for his quick wit, and always armed with a great joke or two, he all-too-often left the room in stitches.  A ladies man, with a larger than life personality, even trying his hand as a restauranter as the owner of "TVG's McGillicuddy’s" where he loved to hold court.  He lived life to the fullest, he was always accessible, a great athlete, a scratch golfer, a great broadcaster, always laughing... but most of all, he was a wonderful guy.

Tim was preceded in death by his father, Clark, his mother, Doris "TuTu,” and brothers Gary, Bob, and Donald “Brownie” Van Galder. He is survived by his brother Richard “Dick” (Nancy) Van Galder; sisters-in-law, Joanne and Nancy Van Galder; his Godson, Tommy Van Galder and Goddaughter, Dana Van Galder; his dearest friend, Jackie Smith; his dear nieces and nephews, and many loving cousins and friends.

Donations in lieu of flowers may be sent in his honor to Madison West High School, Iowa State University, or American Cancer Society.