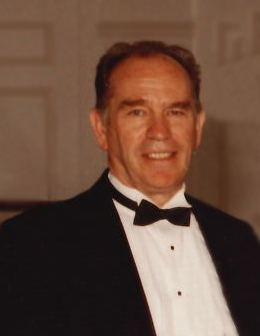 Tom proudly and honorably served in the United States Air Force during the Korean War.  After working for Capitol Airlines and Emerson Electric, he then went to work for McDonnell Astronautics in 1963 and retired after 30 years as a Sr. Manager - Product Support Engineering.  Tom worked on Mercury, Gemini, Skylab, and Harpoon, among other programs.

Tom was very active throughout his life.  He loved Table Tennis, which he learned from his father, and began playing at just 10 years old.  He played in competitive tournaments all over the United States.  He also enjoyed playing horseshoes, pinochle, pool, and poker.  He was a competitive chess player as well, and he would spend his lunch breaks at work playing multiple opponents.

As a person who enjoyed sightseeing, Tom visited almost every National Park throughout the United States.  He and his wife traveled to Europe a couple of times, and he truly cherished their time spent in Austria.

After he retired, Tom built a house on their farm in Bland, MO, where he and Betsy lived for 20 years.  He enjoyed the farm with their family and treasured the memories they made there.

Tom was dearly loved and will be greatly missed by all who knew him.  In lieu of flowers, memorial contributions may be made in Tom's name to Wounded Warriors or Judicial Watch.