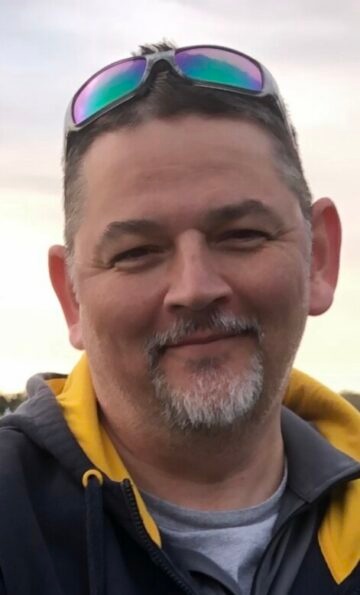 It is with deep sadness that our family announces the passing of our beloved Craig (Paco), age 53, of St. Charles, Missouri, on December 29th, 2021 from a medical condition.

Thomas Craig Ely was born on August 15, 1968 in Poplar Bluff, Missouri, to Thomas Elbert and Marla May Ely.

Since birth he had gone by the name Craig, but his mom always called him Paco and that nickname stuck with him into adulthood.

Craig grew up in St. Charles, Missouri, where he was the third of four kids, and the only boy. Being the only boy meant he was spoiled by his mom and sisters, especially his two older ones. He was the apple of his mom’s eye and they had a very special relationship. He and his sisters were very close as kids and they would spend hours playing with each other whether it be at home, at their grandma’s house in Hannibal, or at their grandparent’s farm outside of Monroe City. There was a lot of time spent with relatives which became the foundation of Craig’s love of family.

After graduating from High School, Craig attended the University of Missouri, Columbia. Shortly after leaving Columbia, he ventured out to Grand Junction, Colorado living with his Uncle Boo Boo and Aunt Patty with whom he had a close bond with and worked in construction. He later ended up in Denver to try out a new city where fate intervened, as that’s where Craig met the love of his life, Dana Rose, as he always called her, and began a love story for the ages. They immediately connected and it wasn’t long before minutes spent together drifted into hours that turned into days, months, and years. He introduced her to all different kinds of music, they attended concerts, hiked, and spent as much time as they could together enjoying the mountains in Colorado. She was perfect for him. She balanced him out in every area of his life. They were the perfect match. Eventually they decided to move back to St. Louis and be closer to family.

A few years after being back in The Lou, they had their first child, a baby girl named Sophia Saldana. Craig and Dana were in love with their baby and his protective instincts took hold. He loved his role as a father. A few years later, they had their baby boy, Benicio Blue. His family was complete.

Craig deeply loved his family and working hard to provide for them was always at the forefront of his mind. He was involved in all aspects of the kid’s lives, whether it was helping Sophia and Benicio with homework, coaching Benicio’s soccer team, exposing them to the ways of the world, family vacations to Florida to see Dana’s family, he was there and was a part of everything.

For those that knew him, two things always stood out- his razor-sharp wit and his intelligence. This combination meant that he was especially good at finding holes in the long, drawn out and boastful stories of others, especially loved ones. His surface level curmudgeonly demeanor would melt away as he had a masterful way of getting you to laugh at yourself. And he could take it just as much as he dished it out! Craig often poked fun at himself and never took himself too seriously. All this good humor plus his kooky hair that sometimes stuck straight up occasionally masked his innate curiosity, deep intellect, and quiet strength.

Craig loved the great outdoors and found both peace and a restorative energy from nature regardless of whether it was golfing, fishing at the farm, or the big, yearly fishing trip with his close friend Gary at Tablerock Lake with the guys, doing yardwork up at the family farm, or simply enjoying a cigar and an ice-cold IPA on the back patio. This backyard space was a special. It was goal realized for Craig – to provide a beautiful, spacious, and oh-so-nearly perfect (just missing the pool!) dream home for his family.

He loved sports, especially St. Louis Blues hockey, St. Louis Cardinal baseball, and Missouri Tiger football. And he especially looked forward to the annual Mizzou football game that they would attend with his close friend from high school and college, Brian and his wife Chris. The tailgating, drinking, and reminiscing while razzing each other about days gone by was something he looked forward to every football season.

Craig kept up with what was going on in the world and always had solid beliefs based on taking in information and looking at it in a very logical and intelligent way. He was up for any debate thrown his way whether it be about politics, sports, music, books, or even movies. He was an avid movie watcher, something that he passed on to his daughter. He watched movies with a discerning eye, with nearly encyclopedic knowledge to point out inaccuracies and strategic missteps.

Through the years, Craig worked in a few different industries, but he found his home and calling when he became a part of Red Bull.

Craig’s instinct for camaraderie extended to a love for his teams at work, especially at Red Bull Distribution Company and later at Red Bull North America – he had a knack for bringing people together and fostering close relationships. Inside and outside of work, Craig was an empathetic and generous listener and mentor to many, gifted in his ability to distill the exact root cause and provide sage advice.

Craig leaves behind a legacy of love and laughter, warmth, wisdom, and strength and is deeply missed by family, friends, colleagues, and loved ones around the country.

He was preceded in death by his father, Thomas Ely, his mother Marla Ely, and his brother-in-law Cary O’Brien.

Please consider making a donation in Craig's memory to Wings for Life https://www.wingsforlife.com/

A Celebration of Life will be held on April 1, 2022 from 2:30 pm until 5:00 pm. Family and friends will share stories  beginning at 4:00 pm.
To order memorial trees or send flowers to the family in memory of T. Craig “Paco” Ely, please visit our flower store.