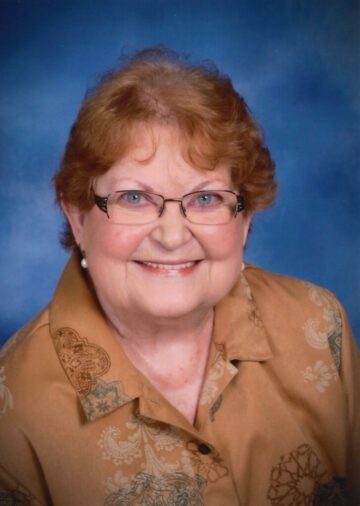 Selma retired from Boeing Aircraft, formerly McDonnell Douglas Aircraft, in 1994 after more than 33 years there. During that time, she had several different jobs, including private secretary to several directors and one VP, but her most enjoyment came from “working with my engineers.”

Selma was a member of Trinity Episcopal Church in Pharr, Texas. She lived in St. Charles but in the winters, she was a Texan. Selma spent the winters in Pharr, Texas. She loved her family, especially her grandchildren and great-grandchildren. Selma’s most favorite things were fishing and Cardinals baseball. She loved fishing more than anything and was very good at it. Selma was also an artist. She enjoyed doing embroidery work, creating artistic oil paintings and loved creating stained glass art. Selma would give many of the pieces she made to her family members. Selma liked to watch Bob Ross paint and enjoyed planting flowers and watching them grow. Selma was dearly loved and will be greatly missed by all who knew her.

Memorials may be made in Selma's name to Trinity Episcopal Church in Pharr, Texas or the American Lung Association or St. Jude Children’s Research Hospital.

Selma's Life Celebration in St. Charles will be held August 27, 2022 at SunRise Church in O'Fallon, MO. Dinner will be served following services.