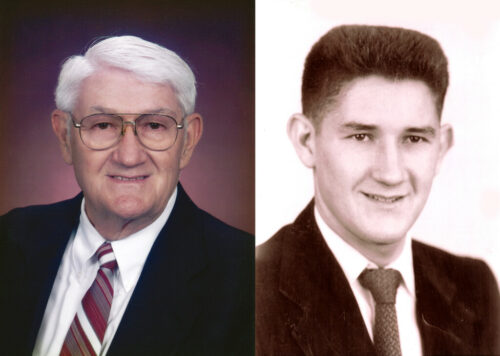 Ron and his wife Peggy met as childhood friends where they grew up in Moberly, MO. They were united in marriage August 22, 1958. He was a family man.  He, Peggy and Tom were a very tight-knit family and would spend time together doing various activities or watching their favorite TV show, M*A*S*H*. Ron proudly served his country in the Korean War with the United States Army. After his time in the service, Ron took a job in Minneapolis at Western Insurance Company as an auditor, which became his lifelong career with different companies.

Ron loved baseball and played in Moberly when he was young. He also enjoyed the game of golf, both playing and volunteering as a marshal at a local course in St. Charles.  He liked to watch the St. Louis Cardinals and college basketball.  Ron was also a fan of racing and traveled to the Indy 500 several times. He enjoyed fishing at Lake of the Ozarks and Minnesota. Ron and Peggy were longtime members of Waypoint Church and were heavily involved with the Sunday school group.  Ron was dearly loved and will be greatly missed by all who knew him.