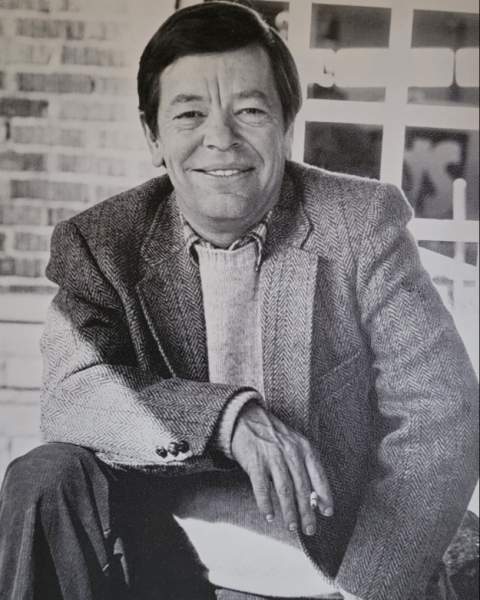 Although Bob never really "grew up", he was born and raised mainly in St. Charles, Missouri.

He attended St. Charles High School, then The University of Missouri in Columbia where he majored in journalism. Bob served in the army and was a paratrooper in the 82nd Airborne, Ft. Bragg, NC.  Some have theorized that jumping out of planes may have contributed to his short stature.

Bob and Peggy were married in 1955 & lived in Houston for a few years before moving back to St. Charles.

Bob loved music and loved to sing. Early on, he was active in the First Babtist Church and directed the youth choir.  Later in life he joined Borromeo, sang in their choir, and taught music to the VacationBible School kiddos. Bob also sang with the St. Charles Choral Society.

Robert R. was hired as News director at KxOK radio in the early 60s. Before FM radio was readily available, it was THE station to listen to for all the top 40 hits, and Bob happened to be there at the height of its popularity. He played charity basketball events with the KxOK Allstars at local high schools and made many appearances at concerts and sock hops in the greater St. Louis area.

Just for fun, Bob took the summer of 1969 off in order to be in the Muny Opera chorus. He was in every production that year except the week the Bolshoi ballet performed - he didn't think he'd look good in a tutu.

After ~ 20 years at KxOK, Bob left to work at KMOX and then WIL.  He did many freelance jobs around St. Louis and a few around the country.  He traveled from Hawaii to Paris with Ralston Purina to MC their awards ceremonies. He and Peggy liked Hawaii so much that they went back nearly every year on their own & especially loved whale watching.

Bob starred in the production of “A Closer Walk With Patsy Cline" Off Broadway at Grand Center.  He also had parts the movies "Escape From New York", "Truman" and "Gone in the Night". Robert R. participated in the radio series "The Secret of Dominion" a science fiction adventure in 13 episodes (and had a blast). He also had a great time participating in the annual Ad Club Gridiron Dinner, and even directed a few times.

He taught broadcast journalism for a few semesters at Lindenwood College.

In his spare time, Bob loved to golf, play bridge, pinochle, gamble, travel, go trout fishing and take float trips with "the bridge club" - many of whom were friends from high school (some of whom MAY have gotten tipped into the ice-cold water by him). He was devoted to his mother, and Bob & Peggy took Florence to state parks, Vegas, and Hawaii whenever the opportunity arose.

Bob was a huge fan of the St. Louis Cardinals & rarely missed watching a game.

He leaves behind 2 well loved (& VERY well fed) cats, Bubba & Baby who will continue to be spoiled by their human stepsister.

Most of all, Bob had FUN with whatever he was doing.  He was a broadcaster, comedian, an actor/singer/director, and a goofball.  He will live on in our hearts as we recount many "Robert R. stories".

Memorials may be made in Robert's name to All Paws, Father Bob's Outreach, St. Louis Media History.