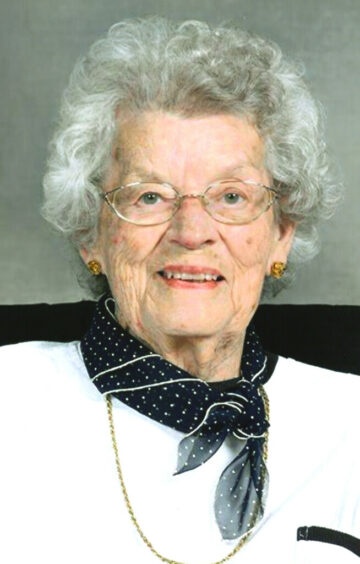 Rita E. Lynch (nee Diekemper) of St. Charles, Missouri, fortified with the Sacraments of the Holy Mother Church, on February 23, 2022, at the age of 99. She was married for 66 years to Thomas F. Lynch until his death in 2016.

Rita was born in Damiansville, Illinois to Henry and Josephine (Fuehne) Diekemper and grew up in Mascoutah, Illinois. Rita worked at the St. Louis Post Office while living in St. Louis prior to her marriage to Thomas Lynch in 1949. She was a long-time member of St. Peter Catholic Church, St. Anne Sodality and the Ladies Monday morning quilting group. She also enjoyed the Hi Hopes Extension Club, gardening, flowers, sewing, and volunteering at church and in her community. She was an avid card player, loved Pinochle, Dominoes, and an occasional good German beer. She loved her country, displaying her patriotism often and was an avid St. Louis Cardinals fan.

We were so blessed to have our mother at home as we grew up, benefiting from her and dad’s great faith, daily rosary, and German heritage. Her quick wit was often on display as was her great sense of humor. We will miss our mother, grandmother and great-grandmother, and find joy knowing that she loved us so much. We are comforted because her strong faith and love of Jesus has led to her final resting place in Heaven.