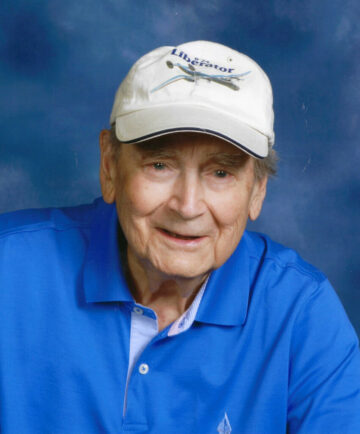 Ralph Covinsky of Lake Saint Louis, MO passed away on Monday, November 22, 2021, at the age of 96. Loving husband of the late Mary (Murray) Covinsky and beloved son of the late Ben and Myrtle (Koetter) Covinsky; Ralph was preceded in death by his brother Neal Covinsky and his son Jeffrey Covinsky. A devoted father of Jefferey Covinsky (Linda) and Janice Surber (Jim) he was also a cherished grandfather of James Surber (Holly), Jeffrey Surber (Kara), Jaclyn Hoevel (Erik) and Jessica Covinsky. He was blessed with eight great grandchildren (Avery, Addison, Lily, Kassidy, Kennedy, Jace, Gavin and Kylee).

Ralph Covinsky was a World War II veteran, as a member of the Mighty 8th Air Force, a division of the Army Air Corps. Achieving the rank of Staff Sergeant; his service from 1943 through 1945 brought him to England, Scotland, and France. In addition to the Good Conduct Medal, Ralph received the Air Medal five times and was honored with the European Theater Medal with five battles: Normandy, Northern France, Rhineland, Central Europe, and Ardennes. Flying in the B-24 Liberator, as a tail gunner, Ralph was shot down on his second mission (July 13, 1944). The crew all bailed out over Sudbury, France but were back flying three days later. Reporting to Dundee, Scotland he and his crew were assigned to fly low level nighttime runs into Norway, Germany, Italy and Sweden; to drop agents, supplies and equipment used by the underground. These squadrons later became known as ‘Carpetbaggers.’

Ralph, a devoted Cardinal fan, loved to play ping pong and pool with his friends. He will be greatly missed by all who knew and loved him.

Graveside burial will be private.
To order memorial trees or send flowers to the family in memory of Ralph W. Covinsky, please visit our flower store.