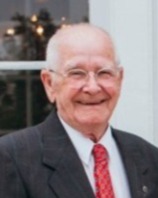 Pete proudly and honorably served in the United States Navy during the Korean War. After the Navy he returned to Centralia, MO, completed his senior year of high school and graduated at the age of 22. He married the love of his life, Dorothy in 1960 and was married for 59 years. Pete was a printer by trade and a member of the printers’ union. His second career was driving an 18-wheeler for Owens & Minor, and he retired in 2001. Pete was a true outdoorsman; he loved quail hunting and trained his own bird dogs. In his free time, he loved driving and would often take day trips. He also enjoyed metal detecting and watching Cardinals baseball. He was a handyman; he loved tinkering and fixing things for his family and friends.

The joy of Pete’s life was his family. He was a devoted father, grandfather and great-grandfather. He will be greatly missed by all who knew him.

Memorials may be made in Pete's name to Disabled American Veterans.