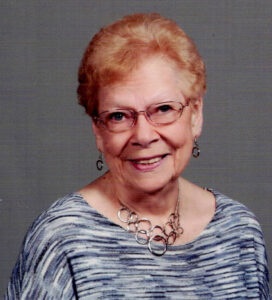 Patsy M. Langston (nee Jones), of O Fallon, MO, passed away Friday, June 10, 2022. She was born in Fruitland, Missouri on October 3, 1940 to Spencer and Ethyl (Morton) Jones. Patsy attended Jackson Public Schools and earned a bachelor’s degree in education from Southeast Missouri State University. Patsy married Tommy (Frank) Langston on August 20, 1961. She began her teaching career in Marquand and Potosi schools in Missouri. They moved to O’Fallon, Missouri and she continued teaching at Joseph L. Mudd Elementary for the Fort Zumwalt School District until her retirement in 1990. Patsy was a lifelong member of Cornerstone United Methodist Church. Patsy was an avid Bingo player going to play two times a week for many, many years. While married, she enjoyed doing many outdoor things with Frank. They always had a large garden and she would make homemade jelly. They did not have any children of their own, but always enjoyed having nieces and nephews spend many summer days and nights at their house. Patsy made sure she watched Jeopardy every evening and was excited when she could answer the questions correctly. She enjoyed listening to country and gospel music and reading novels and the Bible. She also watched as many of the Cardinals games as possible. She enjoyed embroidering and had made several quilts. Patsy was one of eight children and loved spending time with her entire family. She was well known for bringing the oddest, new recipe she could find to any family gathering. Those dishes were usually not the most liked ones of the day. She would go almost anywhere if someone else would do the driving. Patsy had survived three heart surgeries, with the first being in 1984. She could tell you almost anything you needed to know about her medicines and what to eat and not to eat to maintain good health.

In lieu of flowers, memorials may be made in Patsy's name to American Heart Association or Cornerstone United Methodist Church, 1151 Tom Ginnever Ave. O’Fallon, MO.

The family would like to thank Twin Oak Estates and the doctors and nurses of BJC St. Peters for the wonderful care and compassion at this difficult time.