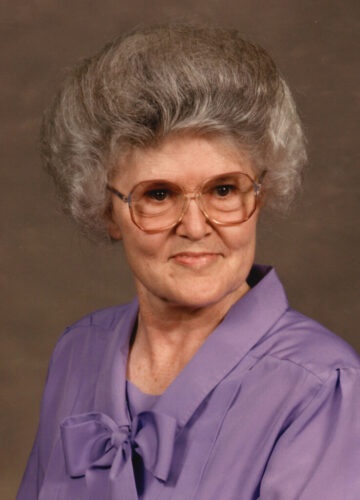 Patricia Ann “Pat” McGarvey (nee Standley), age of 93, formerly of Salem, Oregon, passed away peacefully on Sunday, October 24, 2021. She was a graduate of Salem High School and George Fox University.

Pat worked at the State Capital in Salem, Oregon before moving to St. Louis and marrying Donald L. McGarvey on November 22, 1972. They were married for 42 years, and he preceded her in death in 2015.

Pat was a beloved wife, mother, grandmother, volunteer, and friend who loved to entertain. For many years, she hosted family and church dinners, served at the UPCI Headquarters in Church Administration as a Bookkeeper, taught at New Life Christian Academy, and was a Christian role model for many young women. Pat had a wonderful sense of humor and is fondly remembered for entertaining the Keenagers with her yodeling.

Memorial donations in Patricia’s name may be made to Tupelo Children’s Mansion (Tupelo, MS) or the Wounded Warrior Project.