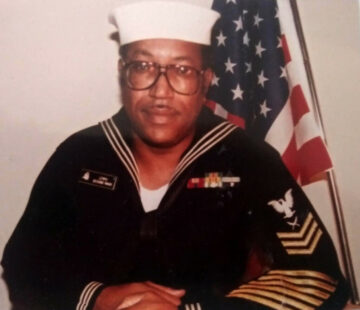 Obadiah was educated in East St. Louis School District #189 and attended Washington Elementary School, Hughes-Quinn Junior High School and graduated from East St. Louis Senior High School in 1963. He received an Associate of Science Degree in Business and Data Processing from State Community College in 1974. He received his Business Degree from Southern Illinois University in Edwardsville, Illinois on December 15, 1979.

Obadiah joined the U. S. Navy on September 1, 1964, and served on several Naval bases in Southern California. In 1965 he was selected to serve onboard the USS Tripoli (LPH-10), which included a tour in Vietnam. He was promoted to the rank of Petty Officer Second Class and earned several medals and ribbons: the National Defense Award, the Vietnam Service 1 (Bronze Star), the Vietnam Campaign Medal, the Meritorious Unit Citation, and the Good Conduct Medal. He received an Honorable Discharge that was signed by President George H. W. Bush.

Obadiah served in the US Navy Reserve for twelve years and was a member of the Commodore's Seabee Staff and earned the rank of Petty Officer First Class. His Certificate was signed by President George W. Bush. He retired from the military after twenty-two years and eleven months of total service.

After leaving the military, he began working for the Alton and Southern Railroad of East St. Louis and transferred to the Missouri Pacific Railroad where he served as Manager of Car Hire. He retired in 2007 after 26 years of service. Following his retirement from the Union Pacific Railroad, Obadiah took a job as Outside Sales Manager for Sears four years and then served as Manager for Lowe's Home Improvement seven and one-half years.

Obadiah departed this life on December 11, 2021. He was preceded in death by his parents; sister Evangeline Ward and brother, Julius Clark Lewis, Sr.

In addition to his wife Patty, son Jay, daughter-in-law Monica, granddaughter Niana, daughter Tamara, and son in law Michael. Siblings he leaves to cherish his memory two brothers-in-law Henry Guiden and George Flood I, a sister-in-law Josephine Cotton Lewis; and a host of nieces, nephews and friends.

The family would like to invite you to watch the funeral service online, Click here to view.

To order memorial trees or send flowers to the family in memory of Obadiah “OJ” Joshua Lewis, Jr., please visit our flower store.