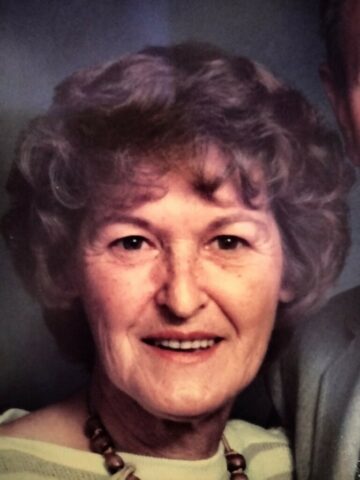 Mildred “Micky” Frances Stopke (nee Collins) 96, died peacefully at her residence at The Boulevard in Wentzville, Mo. on Wednesday, 27 Oct 2021.

Mildred was born 1 July 1925 in St. Louis, the only child of Henry Clarence Collins and Frances Johanna Merkert.

She married Richard Clarence Stopke on 1 Dec 1945. They were blessed with 66 years of marriage before he preceded her in death on 22 Aug. 2012, the majority of those years spent on their farm in Troy, Mo.

Micky was a beloved mother, grandmother, great-grandmother and a trusted and loyal friend to many. She was a skilled seamstress. She was known for “making something out of nothing”, a trait that came in handy when she mentored the members of the Troy 4-H on their sewing skills. She also enjoyed golfing, playing cards, and most of all, talking, as those around her can attest. In her later years, she enjoyed working as a volunteer at St. Joseph’s West Hospital.

Micky is preceded in death by her parents and husband.

In lieu of flowers, donations can be made to the MS Society, or the St. Charles County Veterans Museum.