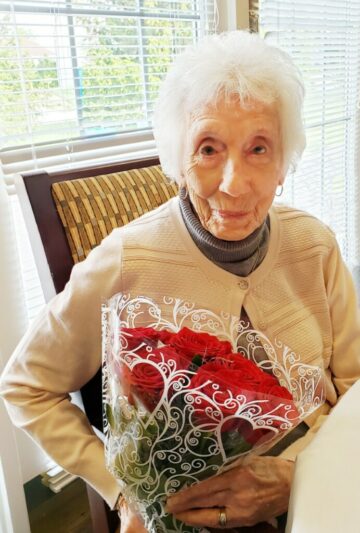 Mary Frances Davis Suelmann died Monday, November 29. She would have been 92 on Christmas Day. Mary, the daughter of Mary Cozillia Riley and Melvin Davis, was born at home on December 25, 1929, in Chaffee, Mo., a small town in southeast Missouri.

Her father left the family when Mary was still a baby. Mary’s mother eventually moved to St. Louis so she could get a job to support her two daughters, Mary and Melba. The girls, who were 21 months apart, spent many summers on their grandparents’ farm in Oran, Mo. It was the Depression, and life was hard. She called her grandparents, Alec and Frances Riley, her “guardian angels.”

Mary graduated from Cleveland High School in south St. Louis and then worked at the Federal Reserve Bank. Popular and pretty, Mary had many friends. Nearly all of her friends were Catholic; she converted to Catholicism when she was 17. Her group of friends included her future husband, Robert Suelmann; they married on June 17, 1950.

Mary and Bob had four children: Mary, who was born in 1951; Christine, born in 1953; Thomas, born in 1956; and Michael, born in 1962. Bob’s career as an engineer and later in the space industry, moved the family to Pittsburgh and Sharon, Penn.; Masury, Ohio; back to St. Louis for a year; Houston, Texas; and finally, back to St. Charles. The family even spent a summer at Cocoa Beach, Fla., just south of where Bob worked at Cape Canaveral, now the Kennedy Space Center.

Mary stayed at home to raise her children. For years she sewed the girls’ clothing, even prom dresses. She welcomed her children’s friends. When her daughter, Mary, wanted to have Mass at their home in Houston, she made hosts for Communion; she learned to drive after one of her children volunteered her to drive in a carpool to school; she became the hit of the neighborhood when she chased down neighborhood boys for “stealing” Chris’ blue ball. She was spunky and took on adventures as they arose. Her family has many stories of funny things that happened with mom.

She loved walking every morning regardless of the weather and was always reading a book. Above all else, she loved playing bridge. In the latter years of her life, she played in several bridge groups and was often called on to be a sub for other groups. Even hearing loss and macular degeneration didn’t slow her ability to play the game well.

Her favorite color was red, down to the curtains on the window and the toaster on the counter.

She was known for the cookies she baked and shared at Christmas. Each member of her family got his or her own Christmas tin, filled with their favorites. She baked 700 cookies that went into the welcome bags for out-of-town guests for her granddaughter, Caroline’s wedding.