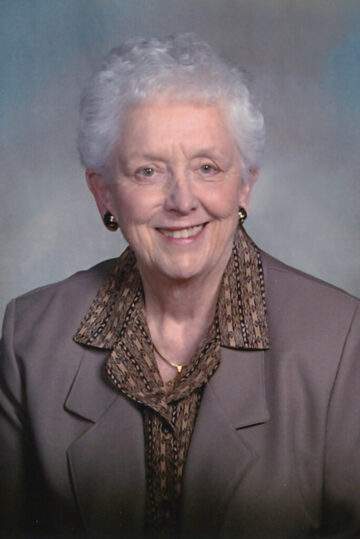 Martha Jean Hammond (nee Wehmer) went to be with the Lord on December 25, 2021. She's preceded in death by her parents, Herman Henry and Anna Marie Wehmer, her husband, Harry R. Hammond Jr. who passed in 2010.  She leaves behind their children, Harry Hammond III (Anne), Diane Johnson (Paul) and Kathryn Bargiel (William Hendricks) and her grandsons David (Jamie) Hammond and Christopher (Holly) Hammond. Her brothers, Henry Wehmer and Chris Wehmer; her sisters, Henrietta Zurstadt and Vernita Kirsch preceded her in death but she loved and enjoyed staying in touch with their children and their families, Richard and Barb Sprinkle, Ron and Glenna Kirsch, Chris, Bill and Paul Wehmer and Don and Barb Zurstadt.

Martha was born July 4, 1929, raised, went to school and lived a Christian life in Evansville, IN where her family is from. She met and married Harry and began their family in the Midwest, finally settling in St. Louis in 1970.  She and Harry retired to Dardenne Prairie and continued to live a full life. She enjoyed hobbies such as painting, quilting, reading, and was a commissioned Stephens Minister with Harry within their church, King of Kings.
To order memorial trees or send flowers to the family in memory of Martha Jean Hammond, please visit our flower store.