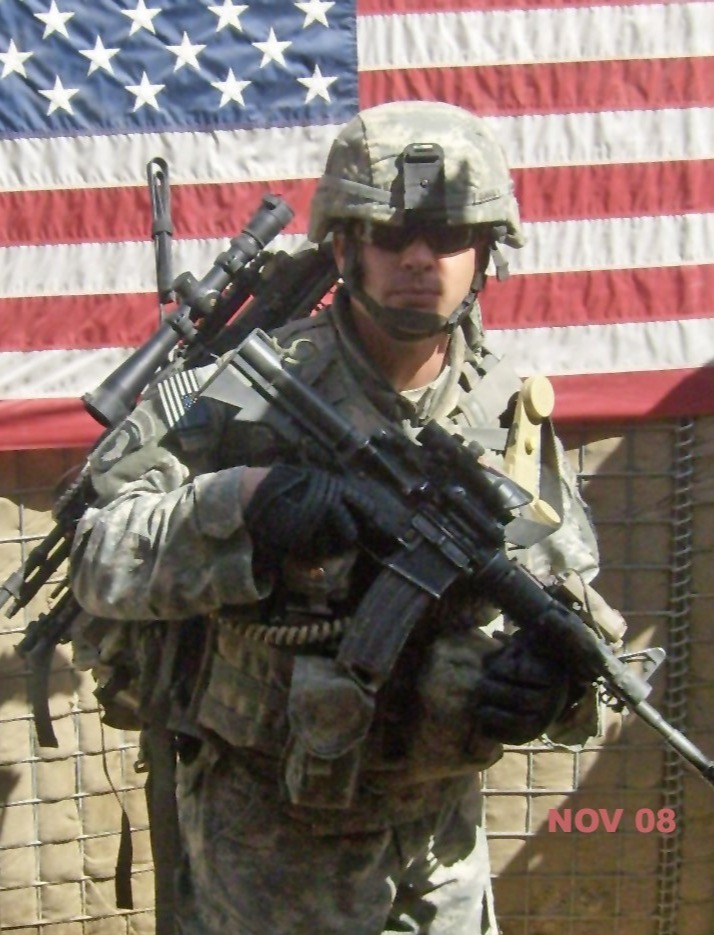 MARK J. DAVEY (52), of Saint Peters, MO, passed from life through death and into eternity on Thursday, 17 November 2022.  Mark now knows everlasting peace and joy, absent from the body and face to face with His Lord and Savior, Jesus Christ, through Whom all his wounds are healed.

Mark was born on 14 February 1970 in Alton, IL to Charles Daniel and Martha Jane Davey.

In his life, Mark was a husband, a father, a grandfather, a brother, a son, an uncle, a Christian warrior, a protector, and a friend to many (including most strangers he met).  He was larger than life, full of love, and way past charming with a sense of humor that was impossible to miss.

Mark was a career soldier in the United States Army.  He defended this nation in five year-long deployments to the Middle East, and numerous additional deployments/attachments with other branches/units.  Mark retired as a highly decorated Cavalry Scout Sniper after twenty years of service, during which time he rose to the rank of Master Sergeant and earned over forty service medals and ribbons to include three Bronze Stars with a “V” device, three Meritorious Service Medals, five Army Commendation Medals, and eleven Army Achievement Medals.  He was an inspiration, and few will ever be able to comprehend the sacrifice he and his family have made on our behalf.

His smile and outlandish sense of humor will be sorely missed, and he leaves behind a legacy of faith in Christ, love for family, and fearlessness in the face of the enemy that will live on in the memories of all who knew him.

Mark was a visible hero on the world’s battlefields while also being an invisible hero in the Lord’s battalion.  Mark is now with the Lord he served, Who, by His matchless grace, has surely told Mark that his duty on both the earthly and spiritual battlefields were jobs well–done.  Sic transit gloria mundi.

A memorial service and celebration of Mark’s life and his ultimate promotion will be held at 1300 (1:00 pm) on Thursday, 8 December 2022 at Morning Star Church, 1600 Feise Road, Dardenne Prairie, MO 63368.  The memorial will be held in the “Venue” at the church.  For direct access, pull around to the far-left side of the buildings once you enter the church parking lot.  The memorial will also be streamed live on the Grace Doctrine Church Roku channel, www.joegriffin.org homepage, and the Joe Griffin Media Ministries mobile app.

As an expression of gratitude for Mark’s valiant service and sacrifice to this nation, his remains will be laid to rest with full military honors on the hallowed ground at Arlington National Cemetery, Arlington, VA.  The internment will be next year on a date specified by cemetery command.

The family extends their sincere thanks for the outpouring of love and prayers, and are asking you to join them in prayer support for the multitude of our nation’s veterans who are suffering from the visible and invisible wounds of war at this very hour.

In lieu of flowers, the family asks for consideration of donations in honor of Mark to one of the following charities: Intrepid Fallen Heroes Fund (www.fallenheroesfund.org), Philippi Freedom Ministries (www.philippifreedomministry.org), Grace Doctrine Church (www.gdconline.org), or Joe Griffin Media Ministries (www.joegriffin.org).

To order memorial trees or send flowers to the family in memory of Mark Joseph Davey, please visit our flower store.