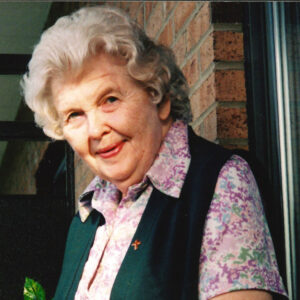 Lynola “Nole” Hulda Sylvester, 92, was called to her Savior’s side on December 7th. She was the youngest of six children born to John and Adele Sylvester of Harvester, MO, on December 21, 1928. Baptized at Zion Lutheran Church in Harvester, Nole attended Zion’s elementary school and was confirmed at Zion on April 6, 1941. After graduating from Francis Howell High School in 1947, Nole worked for the St. Louis Lutheran radio station KFUO. Serving her Savior Jesus and others was an important part of her life. Nole worked 36 years at Concordia Seminary, St. Louis, as switchboard operator, receptionist, and coordinator of pulpit supply for the Lutheran congregations of the greater St. Louis area. She used her skills in oil painting to make a painting of Zion’s original church building which she later presented to the church. Nole became proficient at calligraphy and designed many bulletin covers for Concordia Lutheran Church, Maplewood, as well as numerous fliers and signs for Concordia Seminary. Later, after entering Laclede Oaks Manor Independent Living, she designed birthday posters that were placed on residents’ doors for all to sign. Her final years were spent at Laclede Groves Long Term Care faciliy where she received loving care from the staff.

Nole is preceded in death by her parents, her brothers Milton and Wilfred Sylvester, and her sisters Evelyn Kueker, Fanita Hofmann, and Helen Koester. She is survived by her loving nieces and nephews, many great and great-great nieces and nephews, and her adopted families: Drew and Amanda Nichols and their children, Isaiah, Ivan, Ira, and Isley and the family of Gertrude Maring.

Memorial service to be held at a later date.