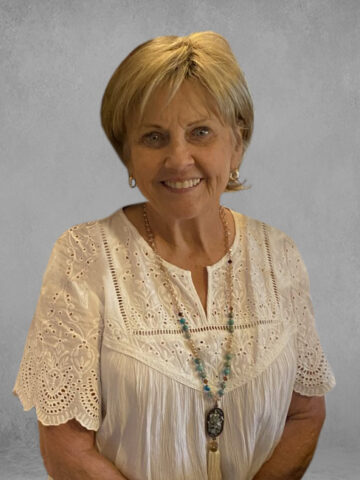 Louise was born on February 9, 1947, in St. Louis, Missouri. She grew up in Wellston, Missouri, with her parents, Art and Marie Landsbury, and her sister, Bonnie. Louise and Bonnie always cherished those years in their beloved Wellston.

Louise was deeply beloved by many, including her family and her numerous friends from all aspects of her life. Louise nurtured her relationships with her relatives, high school classmates, golf buddies, and church friends. She was always there with a listening ear when someone she loved needed her, and she could be counted on for a good story and lively laughter. She was always up for fun!

Louise was a devoted wife, daughter, mother, grandmother, sister, and aunt. She was known for the annual family Christmas party, which she hosted with Greg at their home. Over the years, she enjoyed traveling to her mother’s family home in Bald Knob, Arkansas. Many is the afternoon she and other relatives pored over old photos, passing on family lore to the next generation.

Louise was a devout Christian. She was actively involved in her church, St. Louis Family Church, and was a trained Stephen Minister in Stephen Ministries, a role that gave her the opportunity to mentor those in need. Louise had a beautiful alto voice, and when she attended Wellston Church of the Nazarene (later, Bridgeton Church of the Nazarene), she often sang solos, including “At the End of the Road.” In 1980, she recorded a Christian album in Nashville, Tennessee: For God’s Wonderful People.

Louise was an avid golfer, and in 2018, she hit a hole in one. She also loved games, especially the card game hand and foot and the dice game Yahtzee.

A beautiful woman in every respect, Louise was known for her exquisite sense of fashion and style. She put this talent to use in her estate sale business, Landsbury-Rathouz Estate and Moving Sales, which she owned with her dear friend Francine Payton.

Louise had a successful career in the telecommunications industry with Southwestern Bell and Nextel. She retired from Nextel in 2006.

In lieu of flowers, the family requests that donations be made to St. Louis Family Church.

We will all miss our dear Louise. There will never be another quite like her.