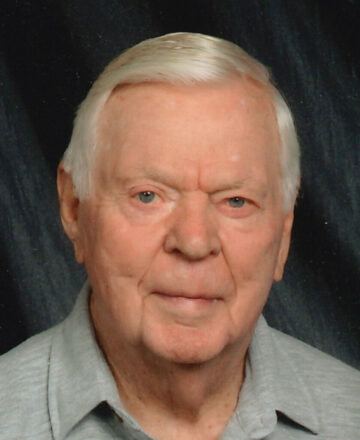 Ken was a brilliant man. He learned electronics while serving in the Navy and then earned a scholarship to Washington University after being discharged. Ken met Dot on a blind date.  They quickly fell in love and were married as soon as they could be while Ken was finishing school and working nights at McDonnell Douglas. They built a home in Florissant and had 4 children. Ken and Dot were married for 63 years filled with fun and dancing into love over and over again.

Ken and Dot loved ballroom dancing and performed often while the children were younger. After Ken retired, he and Dot started square dancing.  Into their later years, Ken and Dot even visited Arizona to dance for a few months each winter.

Ken grew up at the YMCA and was always in the pool while he was younger, both swimming and working as a lifeguard. He loved being on the water whether it was skiing, boating, or swimming. Ken spent summers on the lake with the family boat at Rocky Ridge Ranch. He even skied until he was in his 60s. He set the World Record for most people (plus a dog!) on a Cardboard Regatta. Ken also loved yard work and gardening. He transformed the yard at their home on the lake into a beautiful garden and creek. He was a member of Greater St. Louis Folk & Square Dance Federation and Friedens UCC. Kenneth was dearly loved and will be greatly missed by all who knew him.

Memorials may be made in Ken's name to Warren County Handicapped Services.