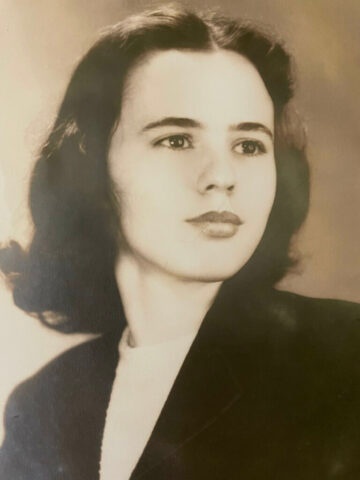 June was born in St. Louis, Missouri, to Rienzi and May Reid. She enjoyed an especially close relationship with her seven siblings and was undaunted by the challenges of growing up during the Great Depression.

June married Dr. Herman Hansen on June 29, 1950, in Denver, Colorado, where Herman completed a rotating internship. One month after their marriage, Herman was unexpectedly sent to the Korean War. During his absence, June delivered their first child, a son, Reid, who she raised herself until Herman’s return to the US.

As a military wife and mother, she supported her husband’s career in the Army while raising five children and adjusting to multiple tours of duty in the US and Europe. She moved her family to a different state nine times as the children grew up. Collecting art and antiques during their travels was a particular interest of hers. She also volunteered in thrift shops, serving military families, and taught Catechism to military dependents.

June graduated from the University of Dayton with high honors in 1989, completing the degree she started at the University of St. Louis some 40 years earlier. Soon after that she began volunteering as a substitute teacher at area Catholic schools. June loved playing bridge, particularly with her siblings. An avid reader of the Wall Street Journal, she enjoyed investing in the market.

June relished animated discussions about current events and was an exceptionally talented storyteller and gardener. She will be missed by all, especially her children, Dr. Reid Hansen (Sheila) of Peoria, Il; Carol Hansen (Ron Dearden) of Wilbraham, MA; Marcus Hansen of Colorado Springs, CO; Laura Delfeld (John) of Austin, TX and John Hansen (Laura) of Oceanside, CA; her brother, Tom Reid of Richardson, TX; nine grandchildren, four great-grandchildren, and many nieces and nephews.

She was preceded in death by her parents, husband, and siblings: Paul Reid, James Reid, Clement Reid, Carol Diller, William Reid, and Mary Wilson.  A funeral mass will be celebrated at St. Charles Borromeo Church in St. Charles, MO, on June 13, 2022, at 10:00 am, followed by interment at St. Mary’s Cemetery in Hazelwood, MO.
To order memorial trees or send flowers to the family in memory of June Reid Hansen, please visit our flower store.