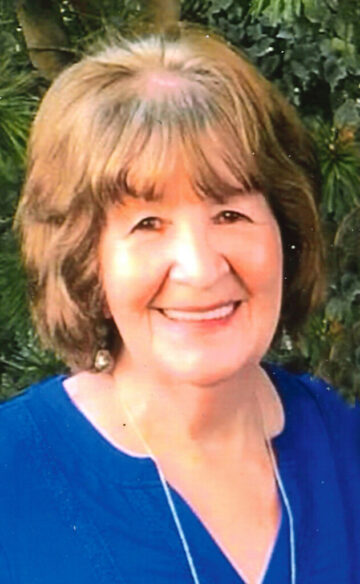 Judith Ann Holliday, formerly of O’Fallon, MO, died at 10:20 a.m. on Thursday, November 25, at her daughter’s home, in the company of her loved ones. She was born on June 22, 1939 in St. Louis, MO, one of nine children born to the late Joseph Holliday and Nellie (McCardle) Holliday.

She married Dennis Stolte in 1959 and was married until 1982.  Judy was the proud mother of her three children — Michael (Carla) Dennis Stolte of High Ridge, MO, Christian (Kim) Joseph Stolte of Skokie, IL, and Susan (Paul) Lynn (Stolte) Birk of O’Fallon, MO.

She worked for several years at Sears-Jamestown Mall, before moving on to a Unit Secretary position at Christian Northeast Hospital, where she worked for 25 years until her retirement in 2000.

Judy enjoyed spending time with her eight siblings and their families, especially on the farm her parents had retired to in Linn, Missouri. Hers was a sprawling tribe of smart, hard-working people who liked to make each other laugh, and the family gatherings at the Holliday farm were always lively and memorable. She was a hard-working mother and a loving grandmother who always made herself available when help was needed.

In her later years, Judy took great pleasure in visiting family in the Ozarks, and in her yearly trips to Tunica, MS, with Paula and Jim, her sister and brother-in-law. She enjoyed the company of her friends and neighbors at St. Williams Seniors Complex, and spending time with her children, grandchildren, and great-grandchildren. She was a life-long Elvis fan, and an enthusiastic follower of Celtic Thunder, and she loved the music of Carly Simon, Carole King, and Neil Diamond.

Judy was preceded in death by her parents Joseph and Nellie Holliday, her newborn child Dennis, her brothers Patrick Holliday, Paige Holliday, Dennis Holliday, and Robert Holliday. She is survived by her sister Sally (Holliday) Conreux and brother-in-law William Conreux,  her sister Paula (Holliday) Robbers and brother-in-law Jim Robbers, her brother Joseph Holliday and sister-in-law Linda Holliday, brother Craig Holliday and sister-in-law LaDonna Holliday and sister-in-law Jerrie Holliday. She is also survived by her three children, Mike, Susie, and Chris, and by her grandchildren — Max Stolte, Corinne Thomas, Greta Stolte, Griffin Birk, and Ava Birk, as well as her great-grandchildren — Margot Thomas, Odin Thomas and Elodie Thomas. She will be dearly missed by them all, and by the surviving families of her siblings.

Per Judy’s wishes, cremation rights have been accorded.

In Judy’s honor and In lieu of flowers, donations may be made to BJC Hospice.
To order memorial trees or send flowers to the family in memory of Judith Ann Holliday, please visit our flower store.