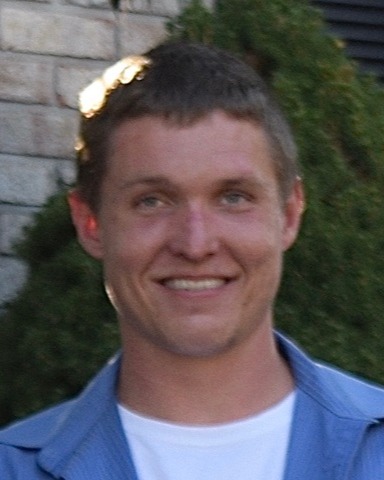 JOSHUA STEPHEN BERTRAM  was born July 6, 1989 and was reborn into God’s family through the waters of Holy Baptism on December 29, 1996.

“Come now, let us reason together,” says the Lord.  “Though your sins are like scarlet, they shall be white as snow; though they are crimson, they shall be like wool.”

He was preceded in death by his loving mother Dana Bertram, his loving brother Robert Bertram, and loving grandparents Duell & Letha Leona Mallett.  He is the beloved son of John Bertram, grandson of Paul & Carolyn Bertram, godson of Deanna & Barton Moenster, and special friend to Kayla Prinster.  Joshua is also survived by many loving aunts, uncles, cousins and friends.

Throughout his life Joshua was always in motion - most often with a tool in hand.  Whether it was a weed wacker, leaf blower, chainsaw, mower, shovel, rake, or broom, he was either earning a living or just lending a hand to a friend, relative, or neighbor.   And he worked with such gusto!

A skilled welder by trade, Josh loved the minute detail of his work and occupied his thoughts with new ideas for future projects.  His dream job and goal was to become an underwater welder somewhere along the coast.

Josh reveled in the outdoors.  Springtime found him hunting morel mushrooms, a skill he learned from his Grandma Mallett.  He constantly explored the world around him and loved hiking, climbing, hanging out at rivers and building campfires to enjoy surrounded by friends.

The quiet and creative side of Josh produced artistic work including drawings, sketches and woodworking projects.  That creativity also spilled over into the kitchen or outdoor grill where he enjoyed cooking.  Hot sauce was usually involved.

Josh was an optimist about navigating life - always willing and eager to tackle the challenges he encountered along the way and turning them into opportunities.  He stayed close to his faith attending a variety of neighborhood churches wherever his travels took him.

Most of all, Josh easily connected with people from all walks of life with his casual and friendly approach.  He looked out for others, especially those in need and generously provided them food, clothing or just a simple conversation with someone who cared.

In his memory, be kind to someone who may be struggling.  That’s what Josh would have done.

To order memorial trees or send flowers to the family in memory of Joshua Stephen Bertram, please visit our flower store.

The service will begin following the visitation time.