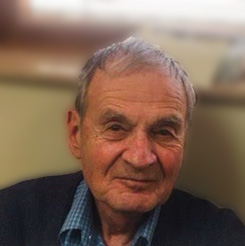 John is preceded in death by his parents, Melvin and Martha (nee Bohrer) Vollmer, his son, Jeffrey Vollmer and his siblings, Iver (the late Mel) Vollmer, Norman (the late Donna) Vollmer and Agnes (Don) Hussey.

John was a U.S. Air Force Veteran who proudly served his country. He worked at Boeing, formerly known as McDonnell Douglas, for many years. Throughout his career, he and his wife lived in France, Germany and England where he was Technical Support for the McDonnell F-101 Voodoo. He continued his career working for Boeing in St. Louis with the F-15 program.

John loved to travel and visited all 50 states and several European countries with his wife, Mary. In his spare time, he liked playing golf and smoking cigars at the park. He was a member of the school board at Orchard Farm for many years, and continued to support the athletic programs. He enjoyed attending his grandchildrens’ events and was very active in their lives. His family meant everything to him. John was dearly loved and will be greatly missed by all who knew him.

In lieu of flowers, memorial donations in John’s name may be made to Cardinal Glennon Children's Hospital.

John’s committal service will be held on Monday, December 6th. Friends and family will be meeting in the parking lot of Baue Funeral Home- Cave Springs at 1:45pm to drive in procession to his graveside.

There will be an open house immediately following the committal service at Rick and Amy’s basement. All are welcome to attend.