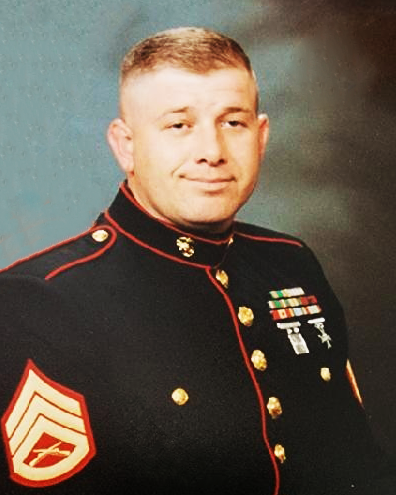 Staff Sargent Hochlan, Jayson, of Ballwin, Missouri, passed peacefully in his sleep on 8 January 2023, from natural causes. Jayson was only 50 years old. The family is deeply saddened and shocked by their loved one’s sudden death.

Jayson was born on 6 September 1972, to Andrew Hochlan and Sunshine Georgan Hochlan. He attended Roosevelt High School where during his senior year he decided that he wanted to join the United States Marine Corps.

Jayson served in the United States Marine Corps from July 8, 1991, to July 31,2011, where he was highly decorated for his actions in Somalia 1993 and Operation Iraqi Freedom 2008. Jayson was stationed in Okinawa Japan for a cumulative total of 12 years, where he fell in love with the culture there. Jayson was officially retired from the United States Marine Corps August 2021.

When Jayson wasn’t working, he was passionate about shooting, hunting, and most of all camping. He loved being outdoors in nature.

Jayson was predeceased in death by his mother, Sunshine Georgan Hochlan, Grandparents Eugene (Helene) Hochlan, and many other loved ones. Jayson is survived by his father Andrew Hochlan of Illinois, brothers Tiesun (Jessica) Hochlan of Missouri & John (Angela) Manning of Iowa. Little buddy Patrick Hochlan, Nieces Desiree (Jeremy) Gunderson, Stephanie (Eli) Manning, great nieces, and many close friends and Military Family. We will miss Jayson more than words can say.

There will be a funeral service held at 09:30, 20 January 2023 at Jefferson Barracks National Cemetery, St. Louis, Missouri.

To order memorial trees or send flowers to the family in memory of Jayson Hochlan, please visit our flower store.