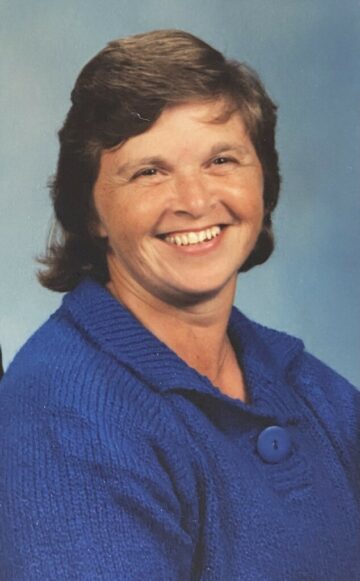 Janice Green Benscoter was born August 6, 1940 in Birmingham, Michigan.  She was raised by a loving father Kenneth, mother Faye, and enjoyed growing up with her brother, Bob.

She was born with a beautifully bright smile that would light up the room when she entered.  And for 81 years, that smile never faded, even in life’s toughest moments.

Janice graduated from Birmingham High School in 1958.  She then attended Central Michigan University, becoming the first member of her family to go to college.  Janice used her college education immediately, landing a job at the electric company out of school.

Janice met her beloved husband Roger on a blind date, and in 1961 they were married in what would become a 60 year bond of love and devotion.

After moving to St. Peters, Missouri in 1964, Janice held a variety of jobs, including serving more than a decade at SCS Compute.  But everyone knows her most cherished job was working at the St. Charles County Public Library.  She loved reading, and was so happy to see all the school children enjoy the stories and adventures captured within the pages of those books.

Janice’s greatest role and legacy will always be as mother to her three children.  She was always there for her kids, helping with school work and making sure her family ate a homecooked meal together each night while growing up.  Janice’s love of family grew even stronger, when she became a grandmother.  She was affectionately known as “Gooie” or “Gram” to them, coming from children who couldn’t quite pronounce Grandma, and the names stuck forever.  She loved her grandkids, playing whatever they wanted on the living room floor or reading to them in her lap whenever they asked.  In later years, Janice and Roger teamed up for an even greater role in their grandchildren’s lives, becoming invaluable caregivers at a moment’s notice.

Janice loved the Lord, and was a long time member of the Birmingham United Methodist Church, Williams Memorial Methodist Church, was a charter member of Morning Star Church and The Way Church in Wentzville.  Her small group at “The Way” led to some of her most cherished friendships later in life.  Janice was involved in many groups and activities- including the Girl Scouts, MU Extension Club “The Doo-Bees,” and her famed Tuesday Night Women’s Bowling Team.

One of her greatest joys was her yearly trip to the beach with Roger.  They looked forward to their three-week getaway to Vero Beach every summer, beginning the packing process weeks before they left.  They truly loved long walks on the beach collecting seashells, their search to find the nightly local dinner specials so they could eat out with their “Florida friends,” and playing Dominoes poolside every night.

Janice never lost her smile, her laugh, her ability to squeeze your hand tightly when she held it, or her fight for life, despite the ever-growing challenges she faced each day.

Janice is now gracefully reunited with Roger, who preceded her in death 4 ½ years ago.

The family would also like to thank many staff members at Colony Pointe and The Arbors for their heartfelt care during such a challenging time.

To order memorial trees or send flowers to the family in memory of Janice E. Benscoter, please visit our flower store.