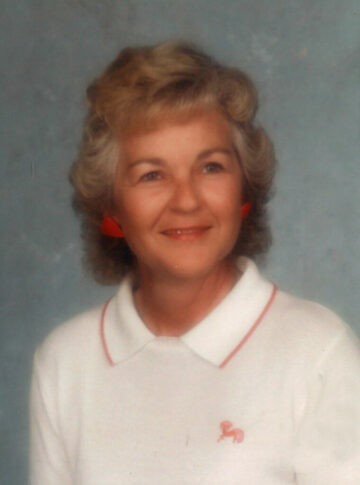 Janet Lorraine Daugherty, of Oakville, MO, peacefully passed away Tuesday, December 20, 2021, at the age of 87 surrounded by her loving family.

Born in the thirties and raised during the WWII era, Janet’s family of eight lived in a small two-bedroom home in Pagedale, MO.  Her parents worked many hours and Janet and her siblings learned early in life the responsibilities of caring for children, chores, cooking, caring for others, and hard work.  She attended and loved Kingsland Presbyterian Church and graduated from Normandy High School in 1952.  She appreciated and was always satisfied with what she was blessed with.  She grew up in an era of dancing and listening to music, both of which she adored into her eighties.  Well known for being the first on the dance floor and encouraging others to join her; Janet loved to laugh and have fun and easily became the ‘life of the party’.  Janet loved to attend concerts, and due to her charismatic personality, she was presented with drumsticks at the end of a Sibrian Orchestra performance in St. Louis.  Very beautiful and talented; a high light in her life was in 1951 when the Police Circus selected Janet, along with twelve other girls, to be paid performers during the opening ceremony.  She was full of energy and enthusiasm and loved her family, friends, and life.  Anyone who met her instantly adored her.  She never met a stranger.  Janet, an avid animal lover, almost always had a pet or two of dogs, cats, and at one time a pig she received on Mother’s Day.  She fondly spoke of her love of horses, as she enjoyed riding and caring for them at her uncle’s house as a young girl and later gave one to her sons on Christmas named ‘Amigo’.

Janet cherished her children, more than anything in life and they were her greatest accomplishment, and she was loved by each of them in return.  Anytime they and their friends are together, they tell stories and laugh about the good times with their mother and even find humor in the challenging times.  She treated all their friends as if they were her own.  Janet was very much loved, and she loved them all in return.  She went on many adventures with her kids and family over the years, to include touring Europe and various places in the U.S., sometimes on the back of a motorcycle, RV, Eurail, bus, taxi, or by ship.  Janet traveled from Hawaii to San Diego twice on a U.S. Naval ship, once with Harry and once with her son Jeff on board her daughters ship, the USS Jason (Ar-8).  While onboard Janet qualified to drive the ship, help painted repair locker five and became qualified shooting the 3”/50 caliber machine gun from the ship to sea and so well liked by all, she even had the attention of the Skippers along Susan’s career and was designated an “Honorary Sailor” by the United States Navy.

Janet was a fabulous cook like her mother and each of her sisters; her children would always argue, “it’s good, but not as good as how my mom makes it.”  She was an avid bowler for 30 years of her life, carrying an average of 171, even into her 80s she still averaged over 150.  Her hard work was always noted, as she worked into her early 80s, and dedicated over 30 years cleaning Briner Electric, this helped keep her physically fit and socialize; in her younger years she did the bookkeeping, and other chores for her husband’s painting business, cleaned businesses and homes, raised her family, and spent a lot of time with her siblings and extended family.  Janet lived in Clarksville MO for 20 plus years and was an active member of the community, working bingo every Saturday, and served as Chaplain of the Clarksville MO American Legion Ladies Auxiliary Post 349.  She and her Normandy High School friends still get together periodically every year.

It is impossible to capture all the achievements and lives that Janet Daugherty has touched in the last 87 years, but she has made a difference in so many lives and has given so many memories to cherish.  She was the backbone of the Bradley family, the bond that held us close together.  Rest in peace mother, grandmother, and friend, you will forever be cherished and missed, and never forgotten.

In lieu of flowers, memorial contributions may be made to the Alzheimer’s Association (https://act.alz.org/) or an animal rescue of your choice.
To order memorial trees or send flowers to the family in memory of Janet Lorraine Daugherty, please visit our flower store.