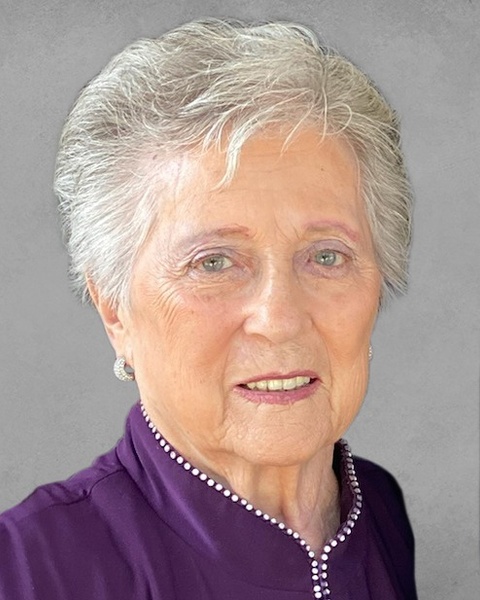 Jane Egelhoff “Mary Jane” was born on July 5, 1936, to Harold and Eunice Kolb in a tiny little duplex in Cottleville, MO. When Jane was 4 she moved to the family farm that is still there today on Wolfrum Road.  Jane oldest of four siblings. who adored her younger brothers Dave, Dale, and Jack. Having lost her dad at the young age of 15, she had to grow up quickly to help her mother Eunice raise the boys and keep the family farm going to put food on the table.

Jane was raised going to Zion Lutheran church on Sundays with her Mother and 3 aunts.  Her grandmother, Cora Schierding Jungerman, started the Ladies Aid Society at Zion in 1923.  Jane proudly followed in her grandmother and mother's footsteps as an active member of Zion and the Ladies' Aid.  Jane was the committee lead for celebrating the 80th anniversary in 2003 and would talk often helping them celebrate  the upcoming 100 year anniversary.

As a young adult, she attended Francis Howell high school where she met not only many lifelong friends but also the love of her life Richard Craig Egelhoff. They were named coronation queen and king their senior year and after graduation, they married in November.  They bought a house in St. Ann because Rich was working at a machine shop downtown Saint Louis. Quickly the newlyweds welcomed their first son Richard Craig Jr. then shortly thereafter followed Deborah Kay and Michael Lee. They were enjoying a beautiful family of 5 and quickly realized their tiny house in St. Ann wasn’t enough for three active children.

So they decided to move back to St. Charles, MO to the family farm. Rich and Jane would build themselves a home to raise their family with their own hands. The entire family contributed to completing their dream home. Dave dug the foundation, Dale assisted with all the plumbing and many other friends and family had their hands in helping. It was a perfect spot to raise a family. The kids had places to ride go-carts, and raise the random animals that Nana would drop off at their door step.

Then as their children became young adults, a welcome surprise came with the birth of their 4th child, Christa Jane. Jane thought her world had just been turned upside down as she had just finished raising 3 kids and gotten 2 out of the house. They were ready to travel with friends, go to Mizzou football games and live the empty nester life, but God had other plans.

When Christa was 5 and starting Kindergarten, Jane decided she wanted to return to school. She went to nursing school and became a medical assistant.

This was also the year she welcomed her 1st grandchild, Kara.  She loved her role as Grandma to all 9 of her grandchildren.  All of them loved dropping in at Grandma's house to see what was in the refrigerator, bake cookies or an apple cake, rake leaves, whatever task she had for them they would enjoy doing with her.  They all knew that Grandma would give them anything they wanted but they just needed to check the expiration label on the milk.

Later in life after retiring from 20-plus years in the medical field she enjoyed her time with friends and family.  She kept a full schedule including board member of Community Living, Ladies Aid, an outing with the Maad Red Hatters of Harvester, maybe at Pinocle Club, lunch with her cousins, and visiting with neighbors.  Her most precious times were visits from her family and she loved all her 9 grandchildren and 15 great-grandchildren dearly.

In Jane's final days she was able to spend time sharing stories with her family, reassuring us that we would all be ok and giving a huge warm embrace to all her kids, grand kids and great grand kids. Jane's unconditional love will be missed by many more than we will ever know.  She was an amazing daughter, sister, mother, grandmother, GG, neighbor, and friend to so many.  We all adored her warm smile and loving touch.  She was a light in the world and will be missed by all.

Memorials may be made in Jane's name to Community Living, Inc.

To order memorial trees or send flowers to the family in memory of Jane Egelhoff “Mary Jane", please visit our flower store.