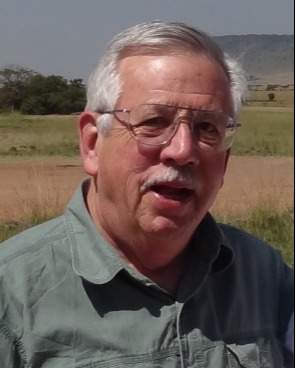 James C. Owen, husband, father, friend, teacher, explorer, community supporter, gardener, and thinker died on September 5, 2022.  James (Jim) was born in Peoria, Illinois on March 7, 1941, and lived a rich and important life.  Jim grew up in Rock Island, Illinois a town he loved for the rest of his life.  He made lifelong friends in grade school at St. Mary’s and later at Alleman High School in Rock Island.  Many of those friends stayed an important part of Jim’s life and recently reunited at his 75th birthday celebrated with great cheer and hilarious stories from their early years - much to the shock of Jim’s children.

Jim’s path led him to study Education at Truman University (formerly known as Northeast Missouri Teachers University) in exotic Kirksville, Missouri.  At this font of higher learning, Jim found two great loves, the first being teaching and the second (more importantly) being his wife and life partner, Karen K. Owen (nee Briggs).  Jim focused his time on his studies, Karen, and some fun with his fraternity brothers at Sigma Tau Gamma.  He captured his learnings at Truman and began teaching in Karen’s hometown of Centerville, Iowa at Centerville High School.  After his time in Centerville, he continued his high school teaching of Social Studies in Breda, Iowa where the winters were long and cold.  Adventure called his name, and he went to teach at a rural high school in Louisiana where the kids chewed on his northern accent and gave him a lifelong appreciation of well-prepared Cajun delicacies, especially red beans and rice.   After soaking up the culture of Louisiana, Jim headed back to the Midwest to reunite with Karen and lifelong friends in St. Louis which would become Jim and Karen’s home.  Jim taught Social Studies at McBride High School in St. Louis City and then at Normandy Senior High School where he would become Assistant Principal and remain for the rest of his career – Go Vikings!  Normandy was a very important part of Jim’s life.  Here he made friends for the rest of his life who became part of his family.  He worked with people and students he greatly admired and respected.  He also gained a deeper appreciation for a great marching band – something that always delighted him when he got a chance to see one perform.

Jim and Karen started a family in Ferguson, Missouri by buying a 100-year-old farmhouse in need of a lot of sweat equity.  Jim and Karen worked hard on making this house a home and turned it and its yard into a great place for their kids, James Justus (JJ) and Bridget to grow up.  They made it a beautiful home complete with a yard built for the all the neighborhood kids to run and play and eat gooseberries.  Jim, a true animal lover, also welcomed dogs, cats, rabbits and a crawdad into the family – even when it would have so much easier to just say no to the menagerie.  Jim and Karen partnered on epic gardens filled with vegetables, fruits, and flowers.  Jim’s love for gardening continued for the rest of his life.  Jim and Karen designed and built amazing displays of a wide variety of plants at all of their homes.  The Owen Family is still grateful to all our excellent neighbors from that wonderful Ferguson neighborhood and to all the neighbors we had after we moved to St. Charles County.  Neighbors have been an important part of Jim’s story.  He worked hard to be a good neighbor and we all benefited from these relationships in so many ways.

Jim also valued his extended family in Illinois, Iowa, and Canada very much.  They were all special to him and when he had the opportunity to spend time and celebrate with them, he greatly enjoyed it.

Jim was always an adventurer, whether it was a road trip with his friends from childhood or camping and exploring wild international spots with his family.   Jim liked to see new places and explore new experiences.   As a result of this adventurous spirit, Jim had great stories!  Ask his friends from those early travels about bottled water and police in Mexico.  Ask whose parent’s cars were commandeered for joy rides.  Ask about that epic journey from Rock Island through Central America on the Pan American Highway in the 1960s – in a VW Van.  Great stories, great friends, great memories!

Jim shared his sense of adventure with his wife, Karen and with his kids, JJ and Bridget.  It started with super fun camping trips at beautiful spots in Missouri and the Midwest.  Always present on these trips was the family dog, who Jim christened Chouteau, as a nod to his love of history and St. Louis.  Jim would pack the car and the family, and Chouteau – of course, would go out on fun-packed weekends in nature.  We all learned so much from these trips, including how loud a train whistle can be when you are a hiking on train tracks (this is one of those lessons in life not to follow).  We had so much fun together as a family.  Jim also ensured that the family saw almost every state in the United States on trips each summer vacation.  He really gave us our love for our country and love for the diversity of our nation.

Jim and Karen explored Europe together, along with travels to South Korea and China.  Jim loved the Terracotta Warriors in Xian.  Upon his retirement, Jim and Karen explored Australia and New Zealand.  They loved it so much; they later moved to Sydney and started housekeeping in an apartment in the Punchbowl neighborhood.  They had a great time becoming true Sydneysiders.

Jim, Karen, JJ and Bridget also traveled together on two epic trips – one to Alaska and one to Africa.  Alaska was breathtaking and Jim loved this wild part of our country.  The trip to Africa was a once in the lifetime true adventure.  Jim loved the wildness of South Africa, Zimbabwe, Zambia, and Kenya.  He embraced every new sight from the majestic animals to fabulous mists and rainbows of Victoria Falls.  He slept in tents and woke to the call of Jambo and noise of warthogs snuffling outside his windows.  It was a highlight of his life adventures.

Jim was dedicated to his community and to making the world a better place.  He was a devout Catholic and found a home at All Saints Catholic Church in St. Peters.  He volunteered for so many organizations over the years, it is hard to capture them all, but some included being a cub scout leader for one of JJ’s troops, serving as a Parish School of Religion Teacher (even when teased by his daughter), and a food bank volunteer with St. Vincent De Paul.  Jim was also a volunteer at Barnes Jewish St. Peters Emergency Department for over 10 years and a volunteer at SSM Lake St. Louis Emergency Department for over 13 years.  Jim rang the bell for Salvation Army for over 20 years, the last many with Bridget, making this a favorite holiday tradition for both.

Jim was a lifelong learner and thinker.  He enjoyed learning new things.  His days began with a good read of the Wall Street Journal, and he read the Economist weekly.  He cared about the world and wanted to understand the good, the bad, and the crazy.  He shared his thoughts and he listened to others.  We all learned from Jim in so many ways.

Jim made the world a better place with his teaching, his volunteering, and just by his decency and goodness to his fellow human.  The world will miss him, but we will miss him most – he was the best Dad, the best husband, and just a great addition to any conversation, group, or team he joined.  We love you, Jim, and we always will!

In lieu of flowers, donations may be made to the Salvation Army.