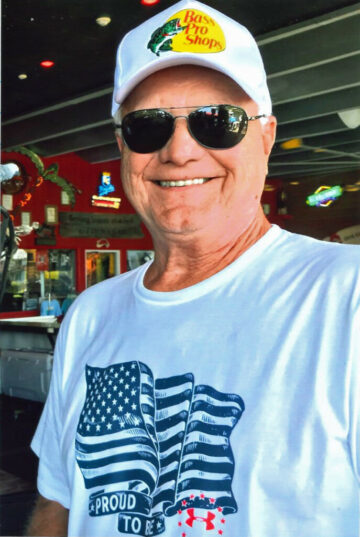 James “Jim” Edward Burkart, 76, of St. Charles, MO passed away on October 30, 2021. Jim was born in 1945, a native of Pittsburgh, Pennsylvania. His mother is Catherine Threnhauser, married to Dallas Threnhauser.  He attended Oliver High School. It was during these formative years where he found his passion for cars. He married Karen Beaty on June 5, 1965 at Travis Airforce Base, California.

Jim was a dedicated member of St. Robert Bellarmine Catholic Church for 44 years. He was a veteran of the Vietnam War and served in the United States Air Force. He worked several positions at the railroad company ACF, renamed ARI, for 26 years; retiring in 2008. He enjoyed retirement by spending time fishing at the Lake of the Ozarks. He enjoyed maintaining cars and things around the house and was known to always be fixing things. Boating with his family while his children were growing up was one of his fondest memories.  Jim was a resident of the Fairways Estates neighborhood for over 40 years.  He and his family are forever grateful for the long-lasting relationships made with neighbors who served each other as friends, and sometimes as caregivers, during their years together.

Jim is preceded in death by his daughter, Lori Lee; his father, Dallas Threnhauser; and his wife, Karen Burkhart. He is survived by his mother, Catherine Threnhauser; son, David Burkhart; daughter, Diana (Jason) Brewer and grandchildren Logan and Megan. Jim was dearly loved and will be greatly missed by all who knew him.

Memorials may be made in Jim's name to American Cancer Society.


To order memorial trees or send flowers to the family in memory of James “Jim” Burkhart, please visit our flower store.