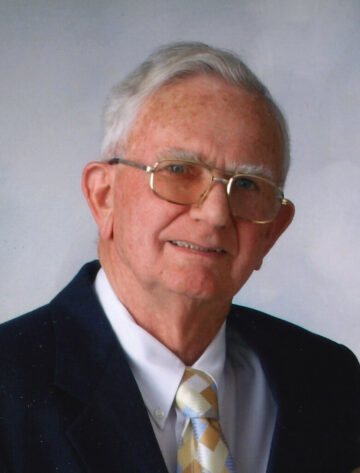 Henry Schimweg of St. Charles, MO died peacefully surrounded by family on Wednesday December 8, 2021 at the age of 97.  Loving husband of the late Martha (McMenamy) Schimweg and beloved son of the late Henry and Loretta Schimweg. Devoted father of David Schimweg and Paul Schimweg; dear brother of John “Jack’ Schimweg; also survived by many nieces, nephews, relatives and friends.  He is preceded in death by brothers Vincent Schimweg, Donald Schimweg and Robert Schimweg.

Henry was employed for many years at Jim Meagher Chevrolet as an Administrator of Truck Sales and Parts. Henry married Martha in 1953 and celebrated 53 loving years of marriage.  His children have many fond memories of a man that was a caring and supportive father.  Henry enjoyed fishing, gardening and traveling, but most of all spending time with family.  He will be dearly missed.

Memorial donations and or masses may be made in his name to St. Charles Borromeo Church.