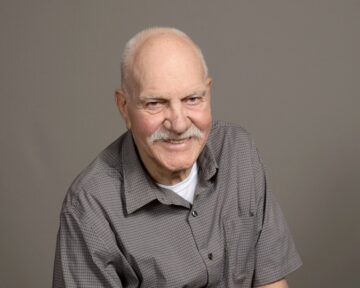 Frank proudly served in the United States Air Force during the Korean War.  He worked for McDonnell Douglas/Boeing and retired after 38 years with the Procurement Department.  He was Past Master of Wentzville Masonic Lodge #46, Pride of the West Lodge #179, a 32nd Degree Scottish Rite Mason, a Shriner Clown, and he was a scribe for more than 30 years.

Frank loved music and played many instruments, including the guitar and organ.  His passion instrument was the harmonica, and he was a founding member of the Gateway Harmonica Club.  He also could be found every now and then playing the spoons!

As a strong man of faith, Frank was a member Cornerstone United Methodist Church.  He and his wife joined the church in 1961, and he was a member for more than 60 years.  He also enjoyed serving as usher many Sundays.

Frank enjoyed traveling with his wife all over the world, and the United States.  He also loved to fish, and looked forward to trips to Lake Norfolk every year.

Frank was dearly loved and will be greatly missed by all who knew him.   Memorial contributions may be made in Frank's name to Cornerstone United Methodist Church.