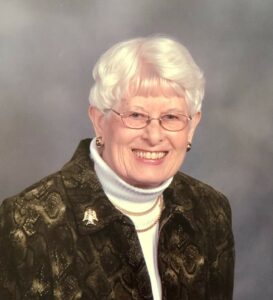 Florence was a devout and faith-filled Catholic. Having been baptized at St. Bernard’s Church in St. Louis, she received her education and sacraments there as well. She and Richard (Dick) were married there on August 1, 1953. After several moves, both in and out of town, they settled into the family home in Bridgeton, MO in 1962. She lived there until 2001.  She was a long-time member of St. Lawrence the Martyr parish in Carrollton, and was a leader in the Light of Christ prayer group that met weekly in the rectory basement for over 20 years. She and Dick coordinated the parish’s Renew program in the early ‘80s initiating small faith-sharing groups. Together they also became Extraordinary Ministers of the Eucharist, and brought Holy Communion to many who were unable to get to Mass on Sunday.

Faith and family were always the center of Florence’s life. When she moved from the family home in 2001, she lived in South County for the next 10 years with her beloved sister, Dolores, and then spent her remaining years living in St. Charles with her daughter, Ann’s family. She was a quiet, cheerful presence in the home, who always had a playful word for the children.  She will be greatly missed.

If desired, donations may be made to Peter and Paul Community Services, 2612 Wyoming Street, St. Louis, MO 63118.


To order memorial trees or send flowers to the family in memory of Florence Campbell, please visit our flower store.