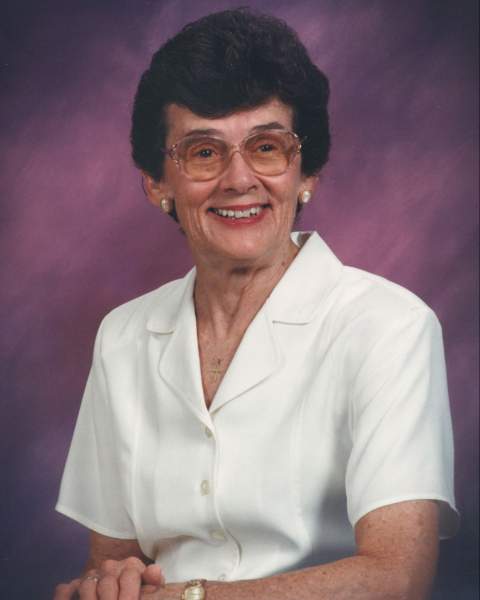 Emma Eloise Fischer of Saint Charles, MO, sadly passed away on Saturday, August 27, 2022 after a brief illness at the age of 93. She was born on July 17, 1929 to Armin and Irene Griewing. She was preceded in death by the “love of her life”, Larry Fischer who passed in 1991. Also preceded in death, daughter Cathy Goellner and sons Larry Fischer and Bill Fischer, sister Ginny (Dick) Dalton. She is survived by her children Nancy (Brion) Tweet, Barb (Steve) Crider, Jeff (Janet) Fischer, son-in-law Bud Goellner and daughter-in-law Phyllis Fischer, brother Dan (Pat) Griewing, sister Betty (the late Robert) Wilhelm.

Grandma “E” was proud of her 13 grandchildren; Nate (Stephanie), Josh, Sarah (Blake), Abby (Tim), Caroline (Ryan), Steve, Jacob, Eric (Courtney), Beth (Matt), Louise (Shane), Lynda, Robbie, Sarah. The many memories of special times together will be cherished. They all loved her lunches of grilled cheese and tomato soup, along with her mini pumpkin breads. She continued watching her family grow with an addition of 20 great-grandchildren.

Eloise worked at St. Joseph’s Hospital in St. Charles for over 25 years. After retirement she volunteered at Birthright St. Charles and St. Peters Church Choir at funeral masses. Eloise had a beautiful singing voice and enjoyed playing her piano. She continued to take vacations with family and friends. In later years she played Rummikub and enjoyed the Hallmark Channel.

Her kindness and her love of family will be forever in our hearts.

Memorials may be made in Eloise’s name to Birthright of St. Charles or St. Peters Catholic Church masses.