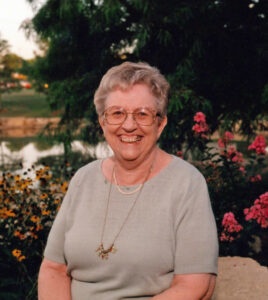 Edna is preceded in death by her first husband, Richard Higgins, as well as her second husband, Marlin Mack, her brothers John Cowan and Charles Cowan, and sisters Margaret Roche, Ruth Mead and Fern Sanchez.

Edna met her first husband, Richard “Dick” Higgins in high school in Colorado and they were married on July 26, 1953. After Dick was stationed in Bermuda, he became a territorial salesman for Brunswick Bowling and he, Edna and their children lived in many states – Fort Worth, Texas, Albuquerque, New Mexico, and Oklahoma City, Oklahoma, eventually being transferred to St. Charles, Missouri in 1970. Dick was offered the sales territory in Florida, but the family felt St. Charles was where they wanted to stay and said “no more moving”!

After Dick’s death in 1980, Edna met and married Marlin Mack on May 11, 1985. She and Marlin loved to travel, going to Hawaii, Florida, and Ohio, with lots of visits back home to Colorado to visit family.

Edna loved music, liked to sing and dance, and enjoyed league bowling. Edna was an excellent cook and loved to make her specialties for her family and friends. She also loved the Cardinals – both the birds in the air and the Birds on the diamond.

Edna will be remembered for her fun-loving and pleasant nature, willingness to help people, and her ever present smile. Many hours were spent having a great time with friends and neighbors. Above everything, Edna loved her family and spending time with them was always the most important thing to her.

Edna was dearly loved and will be greatly missed by all who knew her.

In lieu of flowers, memorial donations may be made in Edna's name to St. Jude's Children's Hospital or American Heart Association.

A memorial service will be held at a future date.
To order memorial trees or send flowers to the family in memory of Edna Mack, please visit our flower store.