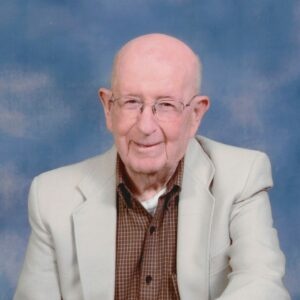 Dwight was a weights engineer for the space program at Kennedy Space Center (Cape Canaveral) and shared his love of space with his children, grandchildren, and great grand-children. He was a huge St. Louis Cardinals fan and loved to watch games from home and from Busch Stadium. He was an excellent wood-worker, an avid reader, a storyteller, and a card-player, as well as a dedicated father and grandfather.

Dwight is survived by his daughters, Robin (Larry) Simonds and Colleen (Steve) Klaus; his son, Dwight (Beth) McCluney III; his son-in-law, Steve Coad; 10 grandchildren; and 15 great-grandchildren with 2 more due in July.

He was preceded in death by his wife, Elva Jo McCluney; his daughter, Sharon Coad; and his grandson, Andrew McCluney.

He will be remembered for his faith in God and his love for his family.

In lieu of flowers, donations may be made to the Greater St. Louis Honor Flight to help send veterans to Washington D.C. to experience their memorials (gslhonorflight.org).

To order memorial trees or send flowers to the family in memory of Dwight Hubert McCluney Jr., please visit our flower store.