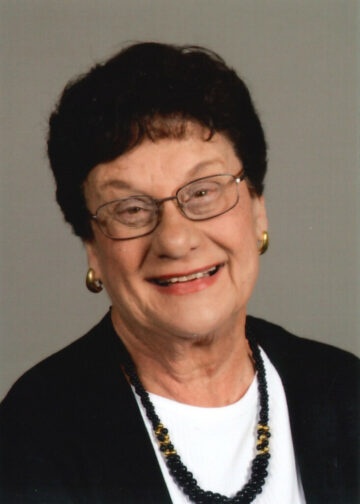 Dorothy L. "Dot, Dottie, Beckie" Oliver (nee Boden) of O'Fallon MO, was a loving and amazing mother, grandmother, wife, sister, aunt, cousin, daughter, mother-in-law, and friend to many. She went peacefully home to the Lord on March 25, 2022, at age 83, with her daughters by her side and in the home she had resided in since 1970.

She was born to George and Estelle (nee Kleinschmidt) Boden on August 22, 1938, becoming the little sister of her brother, Donald Boden. She loved playing with her best friend and spending time in their garden, which supplied the little store her parents ran out of their home in Maryland Heights, MO.  She was always a fighter, surviving polio at age 12 (1950), and later in life, three total knee replacement surgeries.  But she always chugged ahead with a smile on her face and an "I can do it" attitude!

After graduating high school in 1956, Dorothy married her first husband (1958-1980), and she worked in advertising in Clayton, MO, until becoming a mother in 1964.  They had two daughters, Donna Metts and Tracy Kuhlmann (nee Metts).  In 1981, she married the love of her life, O'Fallon veterinarian, Dr. James C. "Doc" Oliver, becoming stepmother to Phil Oliver, Kim Oliver, Dana Spurr (Greg McMullin) and, later, mother-in-law to Sharon Roth and William "Barry” Kuhlmann, and grandmother to Emma Oliver and Katie Oliver.

Dorothy and Doc were married 27 years and loved to travel all over the country, sometimes for weeks at a time, making countless memories. They enjoyed driving cross-country, seeing new sites, visiting state and national parks, and taking just about every tour they could with a special fondness for the "riding ones" (trains/boats/trolleys).  Upon returning home, she would make detailed photo albums to remember their travels.  No matter which direction they were headed, they traveled via Nashville... the Granddaughters hometown! They both loved the theater, as well, and had season tickets to several St. Louis venues.

She had an amazing ability to play the piano and began giving piano lessons at age 15 continuing until 2020.  Dorothy had a special bond with all her students and made quite an impact on them…and them on her.  She had an amazing talent to light up the room and never met a stranger.  People were always drawn to her bubbly, and talkative, personality. She was the "Mom" of the neighborhood and her daughters' friends always wanted to hang out at their house; they just loved her.  Raising her children, Dorothy was very involved with their activities (room mother, girl scouts, carpools, vacation bible school, PTA, church choir and more), and she remained an active part of their lives throughout her life.  Her family, both immediate and extended, meant the world to her.

After her husband passed away in 2008, Dorothy continued to run their rental home business and kept very busy.  She enjoyed her quilting group, playing cards, going to the YMCA, lunch with friends, politics, spending time with family, day trips, attending Cornerstone United Methodist Church, theater (especially Jersey Boys) and playing the piano at Twin Oaks Senior Living.  The residents loved her monthly piano performances and always sang along to the oldies. Christmas was her favorite time of year, which she always made so special for everyone and was known for her delicious cookies. Some of her favorite pastimes were watching Hallmark Movies, the St. Louis Blues and Cardinals games.  Dorothy fought very hard, as she did all of her life, always keeping a positive, determined and faithful outlook.  After her diagnosis she said "I want to go out swingin” and that she did!  We are blessed to know she is now in the arms of God, playing piano with the angels and reuniting with so many loved ones.

Memorials may be made in Dorothy's name to American Cancer Society or the Leukemia & Lymphoma Society or Cornerstone United Methodist Church.

The Funeral Service will be webcast live.  Click HERE to view service.