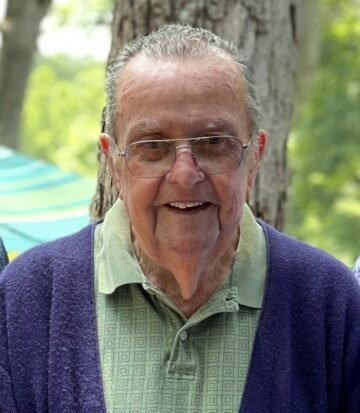 Donald Ray Boggs, of Florissant, Missouri, passed away Monday, January 10, 2022, at the age of 94. He is the beloved husband of the late Eileen Mounce Boggs, father of Karen Boggs Kluesner (Steve), loving grandfather of Alex (Abby), Brennan, and Emily Kluesner, and treasured great-grandfather of Russell Kluesner.

Don enjoyed spending time with his family and was an active grandfather who took his grandchildren to parks, the zoo, science center, train museum, and donut shop for treats. He cherished the time with his great grandson Russell. His face lit up when Russell entered the room.

Don was an avid sports fan and huge supporter of the St. Louis Cardinals baseball team. He enjoyed telling stories of attending games of the St. Louis Browns at Sportsman’s Park when he was younger. Even more, he loved attending his grandchildren’s sporting events.

Throughout his retirement years, Don enjoyed the friendships he formed with the men’s group at the Old Town Donut Shop in Florissant. He was a long-time member of The Lutheran Church of the Atonement in Florissant.

In lieu of flowers, memorial donations may be made in Don’s honor to:

The Lutheran Church of the Atonement

Or on their website: www.Alcs-web.com
To order memorial trees or send flowers to the family in memory of Donald Ray Boggs, please visit our flower store.