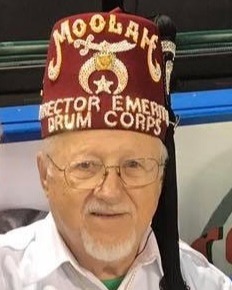 Don was retired from the St. Louis Post Dispatch after 42 years, as Systems Operation Supervisor. He proudly served his country in the United States Navy during the Korean War. He served as secretary and chaplain for the Korean War Veterans Chapter #6. Don was a member of the VFW Post 4182 in Hermann, MO, American Legion Post 312 in St. Charles, and AMVETS Post 106 in St. Peters.

Don was a Master Mason at Overland Occidental Lodge 623. He became a Shriner and was a Director Emeritus of the Drum and Bugle Corp. He was also a member of ARCA 21 Order of Quetzalcoatl where he was made a member of the Order of Knights Eagles and Tigers, OKET #20, and Padre Emeritus. Don was also awarded the DeMolay Legion of Honor.

Don enjoyed fishing and vacationing at the beach. He loved growing tomatoes in his garden, music, and playing the trumpet. He was passionate about computers and the work he held around that throughout his life.

Don relished planning reunions for his family and his high school class. He was an organized, sharp, detailed, and creative man in all that he did. He enjoyed parading for Moolah Shriners, as well.

Don was dearly loved and will be greatly missed by all who knew him.

Memorials may be made in Don's name to Shriners Children's Hospital of St. Louis.