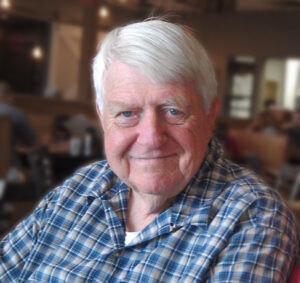 David “Dave” Stewart was born in New Orleans, LA, on December 3, 1938, and died on January 18, 2022, in O’Fallon, MO. Dave was the son of David and Lois Stewart. After graduating from Webster Groves High School, Dave joined the U.S. Navy, then worked at Monsanto (MEMC) for more than 37 years. God blessed Dave and his wife Jeanette with five children, eight grandchildren, and two great-grandchildren. Throughout Dave’s life he had various interests and hobbies, including woodworking, amateur (“ham”) radio, painting, and photography. He was also active in his church and community. Dave was preceded in death by his parents and niece, Joanna. Dave is survived by Jeanette, his wife of 63 years; sister, Gloria; sister- and brother-in-law, Joan and Hank; five children and their spouses: Chris (Bill) Kittler, Cindy (Ron) Zelt, Dan (Sharon) Stewart, Joe (Tracy) Stewart, and Andrew Stewart; eight grandchildren: Mara, Bethany, Jeremiah, Ben, Douglas, Alyxandria, Isabelle, and Gabrielle; two great-grandchildren: Jordan and Alexander; and niece Jean (Karl).

David was dearly loved and will be greatly missed by all who knew him.

Memorials may be made in David's name to Holy Cross Lutheran Church.