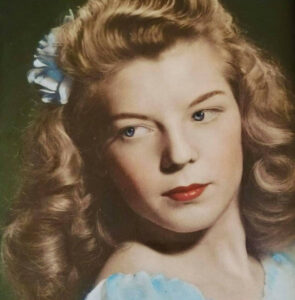 Connie was born in Jerseyville, Illinois in 1927. The family moved to Buffalo, New York in 1935 only to return to the St. Louis area in the 1940’s. She also lived a short time in California and worked at Columbia Pictures. Connie was a very fashionable lady and was comfortable dressing up or down for the occasion. She was even a shoe model for a time! During her younger years she joined the Civil Air Patrol and took flying lessons, she also worked at the Records Center in St. Louis.

Connie was married to Robert N. Hutter in December 1952 who preceded her in death December 2008. The have three children together Barb, Randy, & Karen and stepmother to Robert Hutter, Jr. (K.I.A. Vietnam 1968).

Connie’s interests were varied. She was an avid reader, loved brain-puzzles, crossword puzzles, painting, drawing, traveling, spending time with family, enjoying her grandchildren and great-grandchildren’s plays, recitals, sports, birthdays, and all holidays. She cared for many pets throughout her life holding no favorite between a dog or a cat. She always enjoyed birdwatching and loved flowers, especially roses.

Connie worked in the family-owned businesses throughout the years ranging from an ice cream parlor that served shakes & burgers, a neighborhood grocery store, a coffee shop/cafeteria to the carry out fried chicken business in North County, Missouri.

The family will be holding a private ceremony with immediate family only.

Memorials may be made in Connie’s name to any local animal shelter or the American Cancer Society.
To order memorial trees or send flowers to the family in memory of Constance “Connie” Dolores Hutter, please visit our flower store.