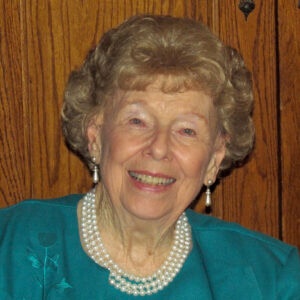 Her husband Paul Bingaman, her parents and brothers and sisters, daughter Diana, daughter-in-law Peggy and niece Madison preceded her in death. She is survived by David (Sarah), Mark (Sandra), Rodney, Debbe (Steve), 6 grandchildren, 10 great grandchildren and many loving nieces and nephews.

Born on a small farm near Dwight, IL on March 17, 1924, to Mary Ellen and John Ogg, Penny lived a full and happy life. In recent years she lived in St. Peter’s, MO and prior to that St. Charles, MO.

After graduating from high school in Dwight, IL during WW II she worked at Elwood Ordnance plant near Joliet, IL making bullets and then in Chicago as a riveter making airplanes for Douglas Aircraft Company. She was a real “Rosie the Riveter”. Then she got a job as a switchboard operator/disc jockey where she enjoyed playing records upon request through speakers to taverns throughout Chicago. She continued to support the war effort by operating a drill press making radios for PT boats. Then she returned home to help run the family farm.

Penny met her husband Paul through letters while he was in the Air Force stationed in England. After meeting at the Chicago bus station, they married and bought their first house in St. Charles. She actively supported her kids in school through the PTA and served as a den mother. Penny loved flowers, she served as President of the St. Charles Garden Club and spent many weekends tending her wildflowers at the family cabin. She owned The Keepsake Shop in St. Charles where she made and sold dried flower arrangements and antiques. She took private pilot flying lessons and once flew in the Goodyear blimp.

Penny helped start an organization called F.I.S.H. that provided food and clothes for innumerable people in need, and she worked there 4 days a week for 43 years. She also took oil painting lessons from noted TV artist Bob Ross, became a talented painter of “happy little trees” and was certified as a Bob Ross painting instructor.


To order memorial trees or send flowers to the family in memory of Clara “Penny” N. Bingaman, please visit our flower store.