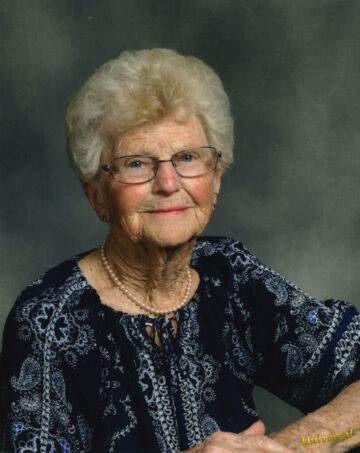 Carolyn June Hollrah was born on June 26, 1927 to Martin and Martha Hollrah.  She was the sixth of eight children.  The family of ten, plus a grandmother, lived happily in a two bedroom home with an unheated attic where the three boys slept.  When Carolyn was 14 years old, they moved into a beautiful spacious farm house built by her father on Elm Point Road, where she lived until she married George Wiegmann on May 8, 1948.  They were married for 63 years before George passed away in 2011.  She is survived by her four beloved children: Karen Wiegmann of St. Charles, Gerry Wiegmann (Debbie) of St. Charles, Scott Wiegmann (Patrice) of Plantation, FL, and Barbara Hutchison (Robert) of St. Charles.  She is also survived by her eight adored grandchildren: Chad Wiegmann (Michelle) of St. Charles, Brian Wiegmann (Lindsey) of Davie, FL, Jay Wiegmann of Davie, FL, Rex Hutchison (Karen) of St. Charles, Grant Wiegmann (Kate) of St. Louis, Tyler Hutchison (Nina) of St. Charles, Amelia Wiegmann of St. Charles, and Annabel Wiegmann of St. Charles.  Her ten much-loved great-grandchildren are Piper, Finley, Calvin, Elliott, Isaac, Romy, Claire and Miles Wiegmann and Samantha and Duke Hutchison.  She also leaves behind two sisters-in-law, Betty Hollrah and Carol Wiegmann, plus numerous nieces and nephews.  In addition to her parents and her husband, her seven siblings preceded her in death: Kermit Hollrah (Ruby), Harvey Hollrah (Verna), Marian Bekebrede (Warren), Norman Hollrah (Betty), Virginia Bekebrede (Henry), Lorraine Bisanti (Sam) and Lois Richterkessing (Fred).

Carolyn lived for her family and her church.  She loved being with her entire family at Christmas and other times of the year.  Her family was her pride and joy.  She never missed an event in which her children and grandchildren were involved, and also made time for many events with her great-grandchildren.

Carolyn was a woman of great faith who was baptized, confirmed and married at Immanuel Lutheran Church, as were her children and most of her grandchildren.  She attended Immanuel Lutheran School and now is proud that her great-grandchildren are attending that school.  One of the Pastors once said that most mornings when he comes to work he would see Carolyn‘s car in the parking lot and knew that once again she had beat him into the office.  She quilted with the Immanuel ladies.  Until Covid, she was involved with the planning of the yearly turkey and sausage dinner and card party.  She worked with the Ladies Aid Society and sewing group.  Hundreds of needy children around the world are wearing clothes Carolyn sewed that were distributed through Lutheran missions.

When her children were babies, Carolyn stayed at home but once her youngest was in kindergarten, she went to work and worked until she was in her 80’s.  She worked as a school cook at Immanuel Lutheran School because then she would be off when her kids were off school.  Another advantage of this job was that she could bring home left-over food so many-a-night the family had the same meal for dinner that they had had for lunch.  Before she was a mother, she worked at the St. Charles garment factory as a seamstress and when her children were old enough to be home alone, she left Immanuel Lutheran School and went back to the garment factory.  When the garment factory closed, she started cleaning houses which she thought was the best job in the world because she loved to clean and now she was getting paid for it!  When she ‘retired’ at 80 she started volunteering at SSM Health St. Joseph Hospital St. Charles gift shop, which she did until Covid closed it down.  Every year she baked hundreds and hundreds of cookies for family, friends, neighbors, the mailman, and the staff of Midtown Hair and Firstar Nails where they took such good care of her.

She was a passionate Cardinals baseball fan and never missed a game.   On her 90th birthday her family rented a party room at Busch Stadium and she was able to see her name in lights when they announced her birthday.  Carolyn also liked to travel.  She cruised once with her sisters, she and George visited Hawaii for their 50th wedding anniversary and Germany on a sister-city-tour, she went to China with her oldest daughter when she adopted a baby, and visited Ireland with her youngest daughter, family, and friends.  She and George bought a house at the Lake of the Ozarks and they spent lots of quality family time there with children, grandchildren, and great-grandchildren.  They also went to Florida every winter to visit their son Scott and his family.

Carolyn had a wonderful life blessed with family, friends, faith and good health.  Until this year, she had probably been sick only about ten days in her entire life.

She was a much loved mother, grandmother, great-grandmother, sister, aunt, and friend to many because she never met a stranger.  She was a stubborn woman who got things done and when she knew she was dying, she insisted she be taken home so she could die in the comfort of her own home where she’d lived the past 69 years.  So, we listened to what our mom wanted and took her home and took care of her until she passed.  We are sad because we will miss her but she is where she wants to be – with God and the family that preceded her to heaven.

To order memorial trees or send flowers to the family in memory of Carolyn June Wiegmann, please visit our flower store.