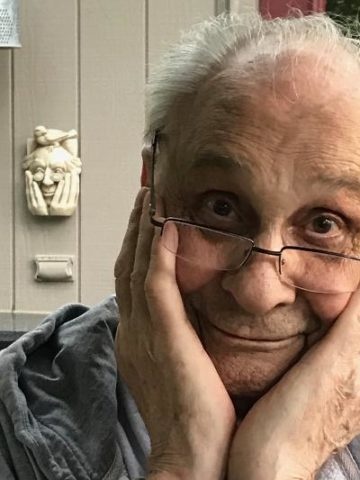 Carl was born at home on Obear Ave in North St Louis, youngest of 4, and doted on by all. He graduated from Beaumont HS in 1947 and while waiting for admission into Washington University premed, enlisted into the U.S. Air Force. His typewriting skills kept him on base vs being sent anywhere else during the Korean War. His medical interest evolved into forming Lancet Medical Sales, where “Uncle Doc” perfected his art of storytelling. Carl reconnected with the Beaumont Prom queen on one of his calls to Children’s Hospital where Joan was volunteering. They were married for 62 years prior to Joan’s passing. They both believed in “keeping the family together” and purchased an A-frame at Innsbrook in 1976 which has been added onto twice as the family grew. Their hospitality and love of nature was contagious and remains the location where the family reconnects with each other. Carl’s love of woodworking is displayed throughout the “cabin” with other family members taking over that passion. He was an avid reader, landscaper, history/joke/storyteller, and lover of all dogs.

Carl & Joan retired to Lake Saint Louis as active members of the Church of the Transfiguration Episcopal Church. The loyal friendships from this congregation were humbling and genuine which gave them both much joy, especially in their last years. Carl was always ready to join or assist in any project, whether needed by family or his Church. We are missing our “favorite sweeper” and his welcoming smile. There is hope we will convene at a safer time at Transfiguration for a celebration of Carl. In the meantime, we can be certain he is spending a lot of time on the other side of the Rainbow Bridge with all of our beloved “snoodas” and his very best bud Joan, The Fair.

Memorials requested in Carl’s name to Shriners Hospitals for Children.
.
To order memorial trees or send flowers to the family in memory of Carl P. Schmidt, please visit our flower store.