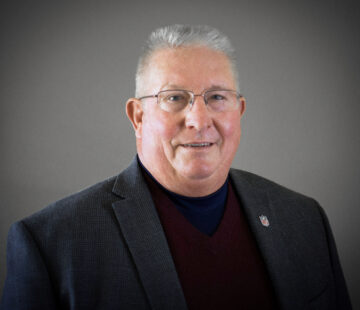 Carl was born and raised in St. Louis. He attended Northwest High School where he played football, basketball and baseball. He then attended Washington University on an academic scholarship and later earned his M.B.A. from Northern Colorado. While an undergraduate, Carl was a United States Air Force ROTC member and was commissioned as a 2nd Lieutenant. Carl served in the United States Air Force from 1973-1976.

While well-known for his role as an NFL official, his first passion was his family. He shared his love of all sports with his children, always encouraging them to be their best. In later years he especially enjoyed spending time with his granddaughter coloring pictures and playing games using his own rules. His hobbies included fine dining, wine, and golf.

Carl Madsen is a true officiating legend and has achieved a rare level of success in both football and basketball. Carl was hired by the NFL as an umpire in 1997 and worked on the field until 2008. He then moved to the replay booth. Carl worked a number of playoff games, including multiple AFC Championships and the Pro Bowl.

Carl was also an exceptional basketball official. He worked the MSHSAA high school playoffs and routinely was called on to officiate some of the biggest area high school basketball games. Carl officiated in six MSHSAA state quarterfinal games and worked the MSHSAA Final Four in 1989 and 1995. Carl was one of the founding members of IAABO 173 and served as Rules Interpreter from 1989-1997.  He was a member of the Saint Louis Officials Association Hall of Fame, inducted in 2009 and the IAABO 173 Hall of Fame inducted in 2019.

Carl was a lifelong member of the Lutheran faith, beginning at Ebenezer Lutheran Church, and more recently, devout member of Zion Lutheran Church. Carl was dearly loved and will be greatly missed by all who knew him.

Memorials may be made in Carl's name to Zion Lutheran Tuition Assistance Fund or the General Church fund.


To order memorial trees or send flowers to the family in memory of Carl A. Madsen, please visit our flower store.