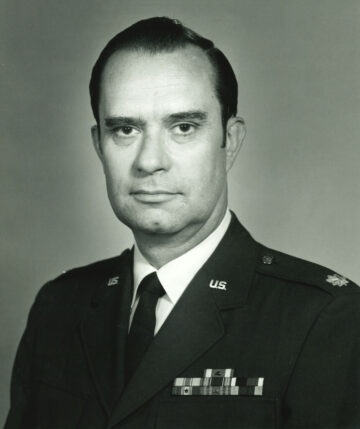 Lt. Col. (Ret) Bobby (Bob) Roger Avery of St. Charles, MO died peacefully of natural causes on March 8, 2022 at age 93. Bob was born on July 10, 1928 to Byron and Ida Avery in Gary, Indiana. He spent his childhood in Gary and graduated from Lew Wallace High in 1946 as senior class president, ROTC commander and honor student. His hardest task throughout school was to convince his teachers that his name really was just Bobby, not Robert. To his chagrin, he received his high school diploma with it printed “Robert Avery”.  With his academic abilities and leadership skills, he was able to secure one of the Indiana appointments to the US Naval Academy in Annapolis, Maryland.

In 1950, Bob graduated from the Naval Academy as a Second Lieutenant with a BA in engineering. The armed forces were seeking the highest quality candidates to become officers in the newly formed branch, the United States Air Force.  At the time they had not begun their own academy. He took the challenge and was commissioned into the Air Force in June 1950. Bob was very proud to say he served in two branches of the military.

After graduation, he married the love of his life and hometown sweetheart, Blanche Maly. They were to celebrate 71 years of marital bliss on April 21, 2022.  Together they navigated the military life while raising their two children, Robert (it really is Robert!) and Karen. They were fortunate to live in Germany twice, Biloxi MS, Oklahoma City OK, Dayton OH, Portland ME, Alexandria VA, Belton, MO and St. Charles MO.  In his 25 years of service he supported our troops during the World War II recovery, Korean War, Vietnam War, and the Cold War as a satellite communications specialist.  He served tours in Keflavic, Iceland and at the Pentagon. During his military years, he received his MBA in Engineering Administration.  Upon retirement from the USAF in 1975, he continued to use his military expertise in a second career for Computer Sciences Corporation assisting what is now Homeland Security.

Bob’s final retirement in 1988, brought him to St. Charles to live near his children and grandchildren. He was able to relax and take on the office of chief babysitter.  He was proud to be a member of the Optimist Club of St. Charles and was honored with Optimist of the Year. He was the historian for the American Legion Post 312 and was a member of the St. Charles First United Methodist Church. Bob and Blanche took many wonderful vacations with family and friends throughout the states and Europe.

Funeral Service and visitation will be held at First St. Charles United Methodist Church 801 1st Capitol Dr. St Charles, MO on April 1st, 2022. Visitation will start at 9:00 am with service at 11:00 and will be live streamed on www.firststcharlesumc.org. A luncheon for all friends and family will follow in Wesley Hall of the church. Interment will be at a later date in Arlington National Cemetery. Memorial donations may be made to the Optimist International Foundation to benefit St. Charles youth.


To order memorial trees or send flowers to the family in memory of Bobby R. Avery, please visit our flower store.