Stivison, Ron L., of St. Charles, MO, died on Tuesday, January 3, 2016, at the age of 69. Beloved son of the late Robert and Lillian Stivison; dear brother of Gary Stivison and Dale Stivison; cherished uncle of Michelle Pallardy and Joseph (Joanna) Pallardy; treasured great-uncle of Alexander Pallardy and Ivan Pallardy; and also survived by other relatives and dear friends. He is preceded in death by his sister Joyce Pallardy.

Ron has always loved St. Charles. He was born and raised in our fine city, and in 1947 he started his life at St. Joseph’s Hospital, back when it was a little brick building on Clay Street. He attended grade school at Immanuel Lutheran School, then on to high school at St. Charles High School. He then went on to serve with the Air National Guard and earned an associate’s degree from Ranken Technical in 1968.

Most of Ron’s work experiences have centered around St. Charles, too. For years, he installed electronics for National Cash Register while also working as the St. Charles County sheriff's “reserve,” helping out when the police needed extra help for the county fair, the jail, or the streets. In 1973 he took a full-time position with the sheriff’s department and later became a detective.

Ron’s political career began in 1984 when he successfully ran for state representative and spent 4 years (2 terms) in Jeff City. As a member of the Missouri legislature, he served on the Civil and Criminal Justice committee because of his background in law enforcement. Ron was also involved with committees for Traffic, State Institutions and Properties, Municipal Corporations, and Tourism. All of his work at the capital prepared him for a future career in city government.

Ron returned to St. Charles in 1988 and worked for the Fire and Ambulance Dispatch Unit, then Interface Security, until he retired in 2006.

When an opportunity to serve St. Charles residents opened, Ron joined the Festival of the Little Hills committee. And when a good friend suggested he run for City Council, he took on the challenge and won. Ron then represented the fine people of the 9th Ward.

Part of Ron’s mission on the council was to encourage the people who serve our city, and he got his chance right away. As councilman, Ron was on the Tourism Committee and vice-chairman of the Streets Committee. He was also involved with the Seniors Advisory Committee, the Cable TV Commission, and the Convention Center Oversight Committee. Ron was also the Council Liaison for the Convention and Visitors Commission, the Digital Media Commission, and the Veterans Commission. Ron also served as Past President of the St. Charles City Council, as well as the Past President of the St. Charles Crime Stoppers Board. He attended the Chamber of Commerce Governmental Relations meetings and was involved because he believed this job is about what we can do for the city, not what the city can do for us.

Another part of Ron’s role was to act as a buffer between city government and the people. To communicate the needs of our residents and to help convey the vision city government has for the growth and well-being of St. Charles in the present and future. Ron worked with great people and really enjoyed being part of the council.

In lieu of flowers, memorials may be made to American Cancer Society, National Arthritis Foundation, or St. Charles Crime Stoppers

The passing of a griet man and friend. i am proud to say he was my friend 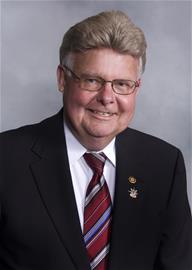