Pat proudly served in the United States Air Force as a military police officer during the Vietnam War, and he was stationed in Hawaii.  He was a member of the American Legion Post 313.  Upon release from the military, he worked for a short period at Glaser Pharmacy, and he was very appreciative for the opportunity and learning experience he received from Mr. Lipkin.  He then went to work for Consolidated Freightways, and he retired after more than 35 years as a local truck driver.  Upon retiring from CF, Pat worked as a custodian at Hawthorn Elementary in St. Peters, where some of his grandchildren were attending at the time.  He also had a second retirement from the City of St. Peters after 10 years with the street division.

As a true patriot, Pat dedicated himself to serving his country and community.  In his younger years, he was a volunteer firefighter for St. Charles County, and a Sheriff's Reserve Officer for St. Charles County.  Later in retirement, he volunteered at St. Elizabeth Ann Seton with the Altar Society to clean the church, where he was a longtime parishioner.  He also volunteered with his wife at Barnes St. Peters Hospital as a eucharistic minister for St. Elizabeth.  On the weekends, he looked forward to serving communion to the residents at Spencer Place Nursing Home.

Pat loved baseball and was an avid St. Louis Cardinals fan, and he never missed watching them on TV, and he enjoyed attending games at the stadium when he could.  He also coached a youth baseball team when he was stationed in Hawaii during his time in the Air Force.  He was a lifetime Elvis Presley fan and had a wide collection of records and memorabilia.  He looked forward to reading the newspaper every morning and working on the puzzles and word finds.  He also loved watching Wheel of Fortune every day and solving the puzzles before the contestants could.  Jeopardy was another favorite of his, and he always joked that he knew all of the answers.

Pat is at peace and at rest, and he will be remembered for his unusual sense of humor that sometimes only he got!  He was loved and will be missed by all who knew him.

Memorial contributions may be made in Pat 's name to Five Acres Animal Shelter or ASPCA.

Due to the COVID-19 Pandemic, Baue Funeral Homes does require all family members and guests to wear a mask while visiting our facilities. Social distancing is required, and guests should stay at least 6 feet apart. Thank you for your understanding.

Pat with his friend, John Cunningham 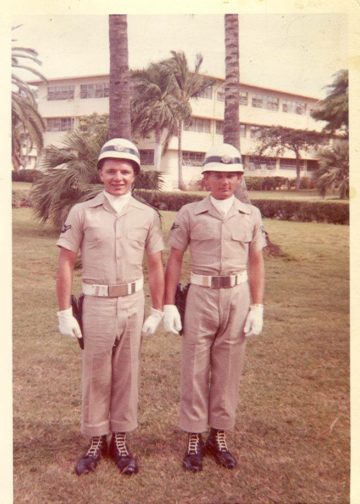